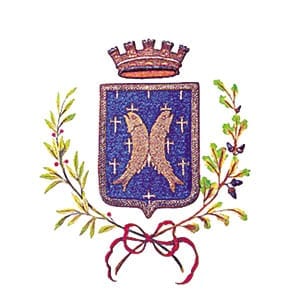 The place-name probably derives from the Celtic bar, that designates a fortress, a fortified place, and not from the French bar indicating the barbel, a freshwater fish that is engraved on the coat of arms of the local lords and for this reason has deceived scholars.

Among the many famous people who have passed here, an anonymous editor of the Messager Valdôtain best summed the spirit of the place in 1959: “Bard is like a wedge between two mountains. On the one hand,  the one that supports the famous Fort (…), on the other hand another even higher mountain (…). Bard is there, in the middle. There are about forty houses, whose slate roofs touch each other and seem to merge. From above you will see a pile of stones, crossed  by an old cobblestone narrow street, still marked by the wheels of the carts of the Roman legions. Towards the top is a beautiful church and a small bell tower. The houses are all old and have portals and windows and balconies made of beautiful worked stone”.

A visit to the Fortress of Bard offers the opportunity for a pleasant walk along the road that climbs in hairpin bends. Another easy hike leads to Mabec, where the “giant potholes” are located. On the heights above the borgo there are two small and interesting villages, reachable on foot from the hamlet of Jacquemet or by car from Albard di Donnas: Albard, with some houses of medieval origin and the eighteenth century chapel, and Crous, a few stone houses standing among chestnut trees. From Bard you can easily reach the Roman road of Donnas, mostly dug into the rock, while from the hamlet of Albard you can reach, through chestnut and beech woods, the Tête de Cou, a panoramic relief on the valley. If you want to go further, there is the whole territory between Gressoney-La-Trinité and Champorcher, which has the peculiarity of a very heterogeneous alpine environment, which extends from the massif of Monte Rosa to Rosa dei Banchi, embracing a valley rich in historical remains and renowned vineyards. In short, the route passes from fresh chestnut forests to coniferous forests rich in streams, from high-altitude meadows to glaciers and imposing rock faces.

There are two traditional recipes that constitute the typical dish of festivities and celebrations: the fiuor de cousse, or pumpkin flowers stuffed and baked in the oven, and the paste de meliga, typical biscuits made with corn flour, whose cultivation in the valley was introduced, according to tradition, by Count Nicole around the middle of the 18th century. At Christmas, after midnight Mass, you can have a cup of boiling broth, the bœuf de Noël.

It’s hard to believe, but this narrow strip of semi-flat land along the Dora river and some terraces on the edge of the Roman road  give life, thanks to the tenacity of a few farmers, to a delicious cru with a suggestive name: the wine of the rocks of Bard, a bright red tending toward garnet, with an almond scent of Nebbiolo grape that can reach 12 degrees, famous since ancient times.

What is “BORGO”. The literal translation of Borgo in English would be “Village”. But the term Village does not fully explain what a “Borgo” is. A “Borgo” is a fascinating small Italian town, generally fortified and dating back to the period from the Middle Ages to the Renaissance.
Category: Valle d'Aosta26 October 2017