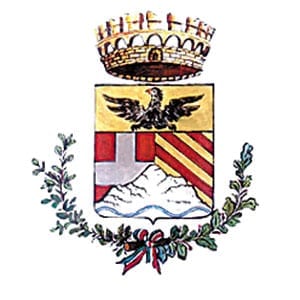 In ancient times Mombaldone was named Mons Baldus (from the Germanic bald, meaning “mountain”), the hill on which the monastery of San Quintino di Spigno stood.

Immersed in the “calanchi”,  narrow, steep-walled limestone inlets, like an oasis in a tuff desert softened by brooms, Mombaldone is the only borgo in the Langa Astigiana, still surrounded by the original walls. Walking along its only central street, from which alleys and passageways depart, archived and courtyard is like taking a journey back in time. The borgo preserves a medieval character, it was built in Roman times near the route of the Via Aemilia Scauri, part of the most famous Via Julia Augusta that from the Ligurian Sabazia (Savona) led to the Padania Valley. The borgo is structured in two areas separated from the castle, now in ruins. The sandstone buildings, characterized by medieval structures, show window sills,  windows, portals (some with coat of arms). There are many façades in local serena and pietra di Langa stone. The urban layout is simple: a single main pebbled road.

The borgo is strengthened towards the valley by strong defensive walls. Starting from via Cervetti, you can admire the old gateway to the ricetto, with an acute arch, intact in its medieval form. It is the access to the old borgo, an agglomeration with linear layout with axis on the main road rich in Renaissance residences, remodeled, embellished or restored between the mid-seventeenth century and the present day. The main monumental attractions  converge on Piazza Umberto I, core of the borgo. The first is the Oratory of Saints Fabian and Sebastian, built on the moat of the castle in 1764, designed by Pietro Barozzi, and restored in 1995-1997: the large and sober classroom, with decorations dated 1883, currently hosts conferences, exhibitions, meetings, cultural and musical events. The second is the parish Church of San Nicola, built by Giovanni Matteo Zucchi in 1790 with a hexagonal plan, always on the moat of the castle. The interior houses seventeenth-century canvases, including some by Giovanni Monevi, and a gigantic organ made by the Collino brothers from Turin in 1885.

After the square, the road climbs up towards the highest point of the borgo. The remains of the Castle (13th-14th centuries), partially demolished in 1637, are flanked. In the centre of the castle stands a square tower,  ruined not only by time and neglect but also by noble will. In fact, it was the Marquis Aleramo del Carretto, whose family was granted the investiture of the feud of Mombaldone in 1209, who donated part of the stones of the tower in the last century to allow the completion of the railway line linking Mombaldone to Spigno. The descendants of Del Carretto are still settled in the Castle: they no longer dominate the inhabitants, but they lovingly watch over the preservation of the borgo and its historical-cultural identity.

In Via Roma, between the walls of the Castle and the dark Portiola – a cave supported by exposed stone vaults that connected the main road with the steep descent at the bottom of which was, near the river, the drinking trough for horses ready to be ridden in case of hasty escape – is the palace called the Fortress. The massive building with exposed stone exteriors, documented as early as 1209 and renovated several times, has been home to the afterlife since 1981, an internationally renowned restaurant, where the Marquise Gemma Del Carretto takes her guests into charming rooms with an Enlightenment atmosphere. And the noble history of the family is an essential ingredient here.

Leaving the borgo, do not miss to visit the old Molino di Mombaldone (16th-17th century) north of the bridge over the Bormida. The ancient building has ensured the survival of the local community over the centuries, but is now devoid of the original equipment.

The Mombaldone menu starts with a starter of local salami (bichiré), continues with a first course made of homemade pasta (tajarìn or ravioli al plìn). Following you can taste the kid of the Langa, the roast mutton fat, tripe or the taditional bagnét (boiled meat in green sauce. Finally,  the delicate Roccaverano PDO robiola cheese accompanied by mustard and

What is “BORGO”. The literal translation of Borgo in English would be “Village”. But the term Village does not fully explain what a “Borgo” is. A “Borgo” is a fascinating small Italian town, generally fortified and dating back to the period from the Middle Ages to the Renaissance.
Category: Piemonte26 March 2018