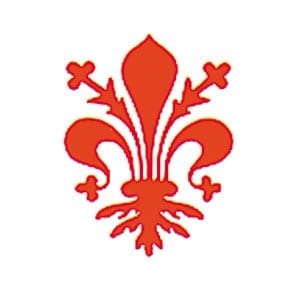 The borgo was founded under the name of Castel San Barnaba in a place known as “la Scarperia”, (scarpa in Italian means “shoe”) because at the foot, of the Apennine Mountains.

Scarperia is one of the most interesting historical centres of Mugello, an inland valley in Tuscany. The borgo, built as a Florentine outpost along the Via Bolognese, has since become an important market and a resting place, exploiting its position. Still today it is crossed and divided in two by the road that leads to Bologna, around which the buildings have formed an urban fabric of vaguely rectangular shape enclosed by walls interspersed with square towers. The heart of the fortified settlement is the Palazzo dei Vicari, a fourteenth-century residence, severe and turreted on the side facing the square, and fortress at the back. Two large walls that form a vast internal courtyard connect it to the keep, which in turn is inserted into the western path of the city walls, which unfortunately is only in some places well preserved. The entire complex of the palace has an embankment at the base of the walls and an agile tower, with battlements and spouts, rising from the right corner of the façade facing the square. The restoration after the earthquake of 1929 made it similar to the Palazzo Vecchio in Florence. The façade is decorated with the numerous coats of arms of the vicars who have followed, demonstrating how much this charge was sought after by the most powerful Florentine families. Leaving. Very interesting are the coats of arms in glazed terracotta by the Della Robbia scholars and Benedetto Buglioni. The interior is characterized by Renaissance finishes and frescoes that contrast with the rough external appearance of the building. Upstairs, in the first room, a “Madonna with Child and Saints” (1554) belongs to the school of Ghirlandaio. The Palazzo dei Vicari, which can be freely visited after recent restoration, overlooks the main square of the town, which also displays two interesting religious buildings.

The first is the Saints Jacopo and Philip Church, founded by Friar Napoleon of Galluzzi in 1326. The church, enlarged in 1870 and framed by the architect Mario Falcini, contains a marble round by Benedetto da Maiano, a tabernacle by Mino da Fiesole and a crucifix by Sansovino, as well as numerous paintings. The other remarkable building is the Oratory of the Madonna di Piazza, dating back to 1320: here the solemn ceremony of installation of the Vicars used to be held, who received the oath of obedience of the Podestà and took possession of their office. In the centre of the chapel on the ground floor there is a late-Gothic tabernacle with twisted columns dating back to about 1490. The building houses the Madonna di piazza, found, according to tradition, in the well of the square.

Also worth mentioning are the oratory of the Madonna dei Terremoti and that of the Madonna del Vivaio, on the road that leads to Sant’Agata. Nearby, do not miss to visit the Torrino: a medieval tower surrounded by a charming Italian garden.

Foods that are poor in origin but excellent in their combination give life to a cuisine with a strong Apennine imprint: ribollita is the traditional Tuscan dish, in fact it is also called Florentine bean soup; potato tortelli are typical of Mugello; another poor dish, the gachas with hooves, comes from Garfagnana and is an excellent contrast between the soft soup and the hard toasted bread. Finally, tomato jelly is excellent, whose ingredients are tomato, garlic and fresh basil.

What is “BORGO”. The literal translation of Borgo in English would be “Village”. But the term Village does not fully explain what a “Borgo” is. A “Borgo” is a fascinating small Italian town, generally fortified and dating back to the period from the Middle Ages to the Renaissance.
Category: Toscana26 March 2018