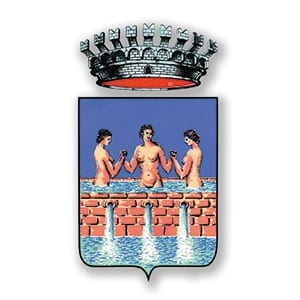 Fontis clusinii in the Roman period, Curtis de Bagno in the early Middle Ages, and then from the 11th century San Casciano dei Bagni; all these names have one thing in common: they all refer to its thermal springs, and it is clear that the role that these springs had during history was extremely important.

San Casciano dei Bagni has been famous over the centuries for its thermal springs. Located on the hills of Siena, near the border with Lazio, its urban structure  naturally traces a route that gently accompanies you during the discovering of its most beautiful corners. It is a circular itinerary, like the old town centre, that goes around the hill peak and the Collegiate church that is topped with a bell tower.

The first image you’ll have of San Casciano dei Bagni is a predominant castle, with its walls and elegant tower, so perfectly integrated into the local surroundings that it does not seem to have been built at the beginning of the 20th century.

From Piazza Matteotti viewpoint you will have one the most beautiful panoramas of the Tuscan countryside. Passing a modern bronze fountain sculpture by Bizhan Bassiri, an Iranian sculptor “adopted” by San Casciano, you can admire Porta di Sopra, Palazzo Lombardi and two characteristic pentagonal medieval towers, ruins of the fortification walls that once were used to defend the borgo.

Continuing on Via San Cassiano, you’ll get to the Collegiate Church of San Leonardo, a parish church which underwent radical transformations during the end of the 16th century and the second half of the 18th century. The Gothic portal was discovered in 1948 on one of the lateral walls and subsequently put on the main façade; on the high altar there is a work of art by Pietro Di Francesco Orioli (Siena 1458-1496) representing the Incoronazione della Madonna.

Next to the collegiate church, the 16th century Church of Sant’Antonio in the 18th century underwent a radical restyling and became a Baroque building; inside this church a 14th century wooden statue is preserved, together with some modern works by Bizhan Bassiri.

Further on you will see an old market place with a local travertine marble well and Palazzo Comunale (Town Hall), that until the end of the 18th century was also the mayors’ residence; some mayors put their coats of arms on the frontal façade.

Following the itinerary you can see some of the most beautiful buildings in the old town centre: Palazzo Fabbrucci, once the residence of one of the most important families of San Casciano dei Bagni whose major representative was Pamfilo, captain of the San Casciano’s troops in the1553-1559 war, between Siena and Florence; Palazzo Bulgarini and Palazzo dell’Arcipretura, 16th century headquarter of the religious authorities of San Casciano dei Bagni, which during the centuries hosted important prelates from all over Europe who used to come here to be cured in the Thermal Baths. In 1769, Grand Duke Pietro Leopoldo stayed here.

Strolling through some narrow streets of significant names such as Via della Pace (Peace street) and Via del Silenzio (Silent street), you’ll get to Porticciola, the gateway made of travertine blocks, placed on the top of a steep climb that made it difficult to be conquered.

Moving to the other side of the borgo, you’ll get to the Church of the Santissima Concezione, a 16th century oratory. Inside this church there is a fresco by Niccolò Circignani, called “il Pomarancio”, dating back to the second half of the 16th century. In front of the church there is the charming Piazzetta del Pozzo, named after an old well, made of travertine marble.

Passing by the ruins of the old walls you’ll get to the so called health itinerary, with places where it is possible to relax in the antique thermal baths of Bagno Grande and Bagno Bossolo.

Coming back to the town centre, you’ll get to Via Tullo Ostilio, characterized by a striking travertine staircase that directly leads from Gattino quarter to Porta di Sopra, your departure point.

Not very far away from the town centre, you can admire the Portico della Ficoncella, a project ordered by the Grand Duke Ferdinando I in 1607, that today represents a precious decoration of the Fonteverde Thermal Centre, and the Church of Santa Maria della Colonna, the oldest monument in San Casciano dei Bagni, built on a small temple dedicated to Igea, the goddess of health, built in the 4th or maybe 5th century B.C. Inside this church, there is a 16th century Renaissance altar  and many frescoes by the masters of the Siena and Orvieto schools.

Ciaffagnoni are a kind of pancakesmadeof water and wheat flour, dressed with pecorino cheese or sugar.

Buglione is made with lamb and chicken.

What is “BORGO”. The literal translation of Borgo in English would be “Village”. But the term Village does not fully explain what a “Borgo” is. A “Borgo” is a fascinating small Italian town, generally fortified and dating back to the period from the Middle Ages to the Renaissance.
Category: Toscana16 March 2018