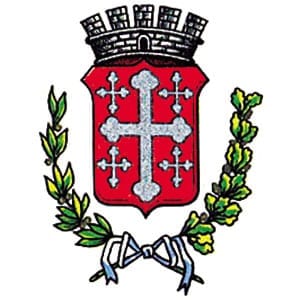 The name derives from Gens Naevia, the name of the noble Roman Family who owned the town.

The medieval town plan of the Borgo is made up of huddled houses with the typical red roofs. The historical centre offers a beautiful view of the surrounding vineyards.

This area is famous for the production of excellent wines and wineries are often housed inside noble dwellings. One of these, the 18th century dwelling owned by Conti di Castelborgo, has got an amazing garden made by the architect Giovanni Antonio Borgese (1751).

The same architect designed the Church of San Michele, built between 1759 and 1789 in Baroque style.

The oldest dwelling in the Borgo is Casa Cotto (13th century), an old fortress-house owned by a rich family of bankers.

The tower called ”Torre dell’Orologio” (1224) houses in its walls a Roman memorial plaque dedicated to Valeria Terza by her husband Caio Aelio.

The Romanesque “Torre del monastero” (10th century), has got a square plan and is the only surviving part of the Benedectine Monastery called ”Santa Maria del Piano”.

Other religious buildings of Neive are the two 16th century chapels dedicated to San Rocco and San Sebastiano. The San Rocco Chapel has a rectangular plan and a bell tower. The chapel was rebuilt in 1783 but has preserved the original central part of the building.

Casa Bongioanni is a small artistic jewel designed by the architect Borgese (1750), well preserved by its current owners. It is embellished with frescos, decorations and plaster elements.

The area produces excellent wines, a very good salami, an aromatic hazelnut and a refined truffle.