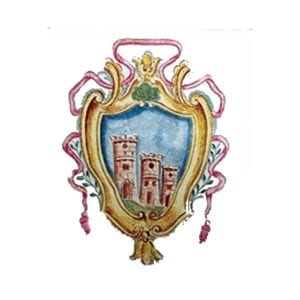 According to legend, at the time of the raids along the Adriatic coast, a group of Moors went further inside in order to build a fortress. Others think that the Castrum Morisci was built near the sea to reject the assaults of the Saracens. The place’s name may come either from a noble family named Mori, or from the word morrecine, which in local dialect refers to the stones on which the castle stands.

The castle gives this medieval borgo its elliptic shape and its dominating position over the green Aso valley, famous for its fruit. The castle, with its watch and defense towers, was the strategic fortress of the Town Hall of Fermo in its war against Ascoli and its allies. The 12th cent. heptagonal tower, 25 metres high, was built with seven sides, which is unusual and not at all clear, perhaps merely to distinguish it from the other watch towers in the defense system of Fermo. From the top of the tower on a clear day your gaze can wander from Mount Conero to the Gran Sasso mountain and onwards over to the coast of Albania. Proud, independent and very proud of its bell tower, as every Borgo is in the Marche region, Moresco has one of the most beautiful Council Rooms in the district. Here there is the large altar piece by Vincenzo Pagani, who also painted the fresco under the portico of the square which was once the left nave of the church of St. Maria in Castro, later demolished and replaced by the parish church of St. Lorenzo. After walking under the Clock tower, you’ll come to the church of St. Sofia, whose original use has changed: known as lu teatrì, it became a small theatre after its desecration. According to tradition it was built to commemorate a young lady, Sofia Amati, who had been raped and killed. Others believe that Saint Sofia’s mother was born in the castle. The church holds an interesting fresco by the school of Carlo Crivrelli (1430-95). It is worth taking a look at two of the civil buildings, the palace of Patrizio Gennari and that of Cardinal Capotosti. Also worth a visit outside the town walls is the Sanctuary of the Madonna della Salute and the Church of St. Maria dell’Olmo in particular, which was enlarged in 1521 and is divided into two parts with two different altars. Vincenzo Pagani was asked to embellish the altars, which he did by painting the fresco of the Crucifixion and the altar piece of the Madonna kept in the Council Room.

Moresco is known for its fruit and vegetable production. After years of excellent harvests followed by a crisis due to competition from foreign markets, the Val d’Aso peach is now regaining popularity thanks to organic farming.

Pizza di Natale is the typical Christmas cake, made by Moresco’s housewives: the ingredients include dried figs, almonds, walnuts, flour, sugar and cocoa. The cuisine of Ascoli Piceno offers delicious vincisgrassi (pasta baked in the oven), fried creams and the delicious olives all’ascolana.

What is “BORGO”. The literal translation of Borgo in English would be “Village”. But the term Village does not fully explain what a “Borgo” is. A “Borgo” is a fascinating small Italian town, generally fortified and dating back to the period from the Middle Ages to the Renaissance.
Category: Marche11 December 2017