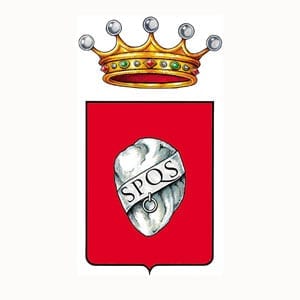 Saxum Ferratum, meaning “stone surrounded by iron”, is the name given by the Atti Counts to the feudal castle they founded, perhaps to mean the power and indestructibility of the building.

Hidden by the peaks of Cucco and Strega mountains, on the eastern side of the Umbria-Marche Apennines, the borgo rises in the places of the Roman Sentinum, whose remains are visible in the Archaeological Museum. Here the epic “Battle of Nations” took place, the clash in which the Roman army faced and won in 295 BC the coalition of the Italic peoples.

Castrum Saxum Ferratum was born from the ruins of Sentinum. The majestic fortress Albornoz dominates the borgo, it was built by the Spanish cardinal and papal legate Egidio Albornoz in 1365 with the money coming from the sale of properties confiscated from the Atti family. From a religious point of view, the Middle Age is represented in the first place by the Abbey of Santa Croce, one of the most interesting examples of Romanesque architecture in the Marche region. The building stands at the opposite side of Sassoferrato and was built by the Atti Counts at the end of the twelfth century for the Camaldolese monks with materials from the town of Sentinum. It has a Greek cross plan and capitals of Lombard origin with geometric, vegetable and bestiary motifs carved on white limestone. Among the pictorial works we remember the altarpiece of San Benedetto by Pietro Paolo Agabiti (1524). Also worth seeing is the seventeenth-century carved and gilded wooden frontal.

In the Castello district, the upper part of the borgo, you can visit Palazzo dei Priori, seat of the Civic Archaeological Museum; it  was begun in 1335 and finished at the beginning of the sixteenth century. It is joined to the Town Hall, overlooking Piazza Matteotti and the result of changes in the eighteenth and nineteenth centuries. The Romanesque-Gothic church of San Francesco (documented with the convent since 1248), in white ashlars and with an ogival portal on the façade, also stands out in the oldest part. Inside, canvases by Ramazzini, Guerrieri, frescoes by the Fabriano school and the painted cross, a very high expression of the fourteenth-century Rimini school in the Marche region. Piazza Matteotti is also the site of the fifteenth-century Palazzo Oliva, which houses the first floor of the collection of Marchigiani engravers from 1550 to present day and the second floor of the Civic Art Collection with about thirty works including three plates by Pietro Paolo Agabiti (1465-1540) and two paintings by Giovan Battista Salvi (1609-1685), known as “Il Sassoferrato”, painter of nostalgia and repetition, pupil of Domenichino and follower of Guido Reni, author of superb portraits – almost a pre-Raphaelite.

The Bishop’s Palace (1530-1551) is annexed to the church of San Pietro, probably built with the primitive feudal castle (1245-1275). It became a collegiate church in 1580 and was rebuilt and enlarged in 1717 after the collapse of 1688; the church has works by Tarquinio Salvi, father of Sassoferrato, Agabiti, Ridolfi and Giovanni Contarini. Palazzo Merolli in the Borgo district, the lower part, is a beautiful example of a late Renaissance building built on pre-existing medieval buildings. The church of Santa Teresa d’Avila, built by the Discalced Carmelites, is incorporated into the church. Completed in 1682, it is in neoclassical style and houses an olive wood statue of the Risen Christ dating back to 1630. Palazzo San Bartolomeo, completely restored, dates back to 1258: it was a convent of Benedictine nuns, like the present palazzo Santa Margherita di Paravento.

The icon of San Demetrio is a refined Byzantine late fourteenth century work of art. It is a small mosaic on a wooden support covered with embossed and gilded silver foil. It is part of the prestigious Perottian collection of Byzantine reliquaries and is housed in the Civic Museum.

The church of Santa Chiara is annexed to the thirteenth century monastery that still houses a small group of Poor Clares nuns. In the monastery you can admire two Madonnas and an Annunciation by the Sassoferrato, a painting by Antonio da Pesaro and a Crucifixion of the seventeenth century by a Nordic artist.

In the Archaeological Park of Sentinum you can see the remains of a thermal building, a foundry and another thermal building in Santa Lucia, outside the walls of the Roman city.

The Museum of Folk Arts and Traditions is dedicated to agricultural activity, very developed in this corner of Marche. The Museum of the Sulfur Mine and the Archaeological-Mining Park bear witness to industrial activity.

Meat of the Marches breed, cheeses and cured meats, saffron and honey are the excellent local products.

What is “BORGO”. The literal translation of Borgo in English would be “Village”. But the term Village does not fully explain what a “Borgo” is. A “Borgo” is a fascinating small Italian town, generally fortified and dating back to the period from the Middle Ages to the Renaissance.
Category: Marche18 May 2018