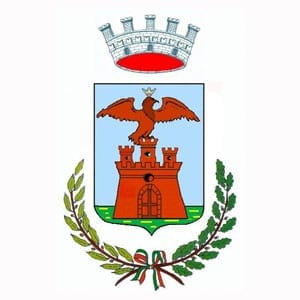 The name Castellum Sancti Petri (Castel San Pietro) is recorded in some documents dating back to the end of the 15th century,  also with the variant Castrum Sancti Petri, due to the presence of the military fortress built by the Colonna family.

Perched on the top of Mount Ginestro (763 meters above sea level), 40 kms from Rome, the borgo has a long history, which begins in the late Bronze Age (XV-XIV century BC), as evidenced by ceramics recently found in the upper part of the mountain, referring to the first inhabited nucleus. From here  in the following centuries the city of Praeneste was founded, the present Palestrina, famous in Roman times for the sanctuary of Fortuna Primigenia. The top of the mountain became the seat of the acropolis and the cult of Jupiter Arkanus. There were also rites linked to the practices of augurium and auspicium. The sixth century BC  circuit of polygonal walls that surround the acropolis is part of the entire circuit of fortifications, about 4.5 km long, which also encloses the underlying city of Palestrina.

In the sixth century BC the site became the seat of a Benedictine monastery, where Pope Gregory the Great stayed. In the twelfth century the territory entered the fiefdoms of the Colonna family who built here a castrum with a strategic-military function, destroyed, in the clash with the papacy, a first time in 1298 under Boniface VIII and a second time under  Eugene IV in 1436-37. The reconstruction of the fortress in 1482 led to the development of the borgo and to the use of the ancient castrum for civil and administrative activities. In the seventeenth century, with the sale of the feud to the Barberini family, the town underwent substantial urban changes. Where the Benedictine monastery stood, the Barberini family rebuilt the church of St. Peter the Apostle, placing its entrance on the new square in front.

Just outside the centre,  Valle delle Cannuccete is a protected natural area that extends for about twenty hectares,  home to the typical flora and fauna of the Lazio region. Inside there are the remains of the pre-Roman aqueduct dating back to the 6th century BC, made by Greek manpower, as some letters of the Greek alphabet on the walls of the conduit reveal.

Abandoned in the nineteenth century and reduced to ruins, the fortress was restored and recovered for public use at the beginning of the twentieth century. Built by the Colonna family for defensive purposes on the highest point of Mount Ginestro, it was destroyed for the first time in 1298, immediately rebuilt and again damaged in 1436-37. With the restoration of Stefano Colonna in 1482, the fortress lost its military function to become the community’s food warehouse.

The church of San Pietro Apostolo rises in the area of a Benedictine convent existing since the VI century A.D. Re-built by the Barberini family in the middle of the XVII century, the church was restored during the pontificate of Clement XII around 1730. At the entrance,  the statue of St. Peter is the work of the Neapolitan Paolo Benaglia (about 1730). The holy water stoups reuse an altar and a base of honorary statue, both from Roman times. The altarpiece was painted by Giacinto Gimignani in 1633. Under the altar lie the remains of Blessed Margherita Colonna.

In winter, the artistic Nativity Scene with life-size characters is housed in the Colonna fortress, where an entire village is rebuilt with huts, mill, fountain and representation of the crafts. On December Sundays there are Christmas markets of artistic handicrafts.

The food and wine itinerary on the last Sunday of July is an opportunity to taste the famous Giglietto, a Slow Food Presidia biscuit.

In mid-August, for an entire week, the patron saint’s festivals of San Rocco take place under the banner of historical re-enactments and music, with events in the square and fireworks.

What is “BORGO”. The literal translation of Borgo in English would be “Village”. But the term Village does not fully explain what a “Borgo” is. A “Borgo” is a fascinating small Italian town, generally fortified and dating back to the period from the Middle Ages to the Renaissance.
Category: Lazio21 May 2018