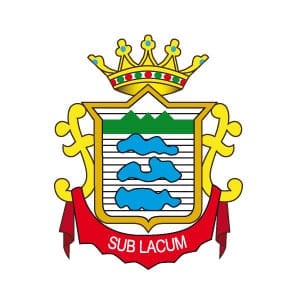 From the Latin sub laqueum,”under the lakes”, the town rises under the watertight Simbruina, the three artificial lakes created by the barrier of the course of the river Aniene, on whose right bank the emperor Nero had a villa.

The only remaining monastery of the thirteen founded by St. Benedict of Norcia in the Aniene valley is that of St. Scholastica, the oldest in the world of the Benedictine order. The structure develops around three cloisters: the Cosmatesque cloister (13th century), the Gothic one (14th century) and the Renaissance one (16th-17th century). The Romanesque bell tower dates back to XI and XII century. The Gothic atrium is embellished with an internal garden and a monumental arch in flaming Gothic style. 13th and 14th centuries frescoes and twisted and binate columns decorate the Cosmatesque cloister. The church was designed in neoclassical style by Giacomo Quarenghi in the second half of the eighteenth century and stands on the site of the primitive oratory of the sixth century. Inside the monastery, the National Library houses manuscripts, parchments and the first incunabula in Italy, imprinted by two German printers in 1465. The oldest Benedictine monastery in the world is therefore also the cradle of the press in Italy.

Defined by Petrarch as “the threshold of paradise”, the monastery of St. Benedict was built on Mount Taleo from the end of the twelfth century to guard the cave (the “sacred speco“) in which, according to tradition, Benedict of Norcia retired in his three years of hermitage. It consists of two superimposed churches and several chapels, almost camouflaged with the surrounding rock. The frescoes in the first bay of the upper church are by the Sienese school (1360 ca.), while those of the lower church are by the Magister Consulus and its workshop (late XIII century). The lower level of this church leads to the sacrospecus that welcomed Benedict’s solitude. Inside the cave there is a statue of the saint made in 1657 by Antonio Raggi, a pupil of Gian Lorenzo Bernini. From the cave, a spiral staircase leads to the chapel of San Gregorio, decorated with Byzantine frescoes dated 1228, in which you can recognize the shape of St. Francis, portrayed when he was still alive, without halo and stigmata. Returning to the lower church, you can reach through stairs the cave-pastors, with the fresco of the Madonna with Child and Saints (9th-Xth century), the oldest of the monastery. Next to it, there is the rose garden bloomed by St. Francis on the brambles on which St. Benedict was thrown to escape the temptations.

The convent of San Francesco was built in 1327 on a small chapel donated to Francis when he visited the Sacred Speco in 1223. On the main altar stands the wooden triptych by Antoniazzo Romano (1467) depicting the Virgin with Child and Saints Francis and Anthony of Padua. In a chapel there are valuable frescoes by the circle of the Sodom (early 16th century) and a splendid Nativity attributed to Pinturicchio or its school. Not far away, the bridge of San Francesco was built in the 14th century in blocks of local stone called “cardellino”.

The fortress was founded in the eleventh century by the abbot of Santa Scolastica Giovanni V to establish the monastic rule over Subiaco. From 1456 it became the residence of the commendatory abbots, including Rodrigo Borgia, later elected Pope Alexander VI, and Francesco Colonna. In the mid-eighteenth century Abbot Giovannangelo Braschi, who became Pope Pius VI, restored the structure. At the foot of the fortress, amidst alleys, stairways and views, there is the church of San Pietro, rebuilt in 1949 by the ruins of the war, and the little square of Pietra Sprecata, generated by the confluence of irregular pathways of forging.

Finally, on a rocky ridge almost overlooking the river, stands the church of San Lorenzo, a rebuilding of the primitive parish church of 368, the oldest religious building in the territory.

The subiachino is an almond biscuit, roar shaped, covered with white icing, which is found in every pastry shop, along with the wine doughnuts, tozzetti and herbal teas. The monasteries of San Benedetto and Santa Scolastica sell herbal products and handicrafts.

What is “BORGO”. The literal translation of Borgo in English would be “Village”. But the term Village does not fully explain what a “Borgo” is. A “Borgo” is a fascinating small Italian town, generally fortified and dating back to the period from the Middle Ages to the Renaissance.
Category: Lazio4 March 2018