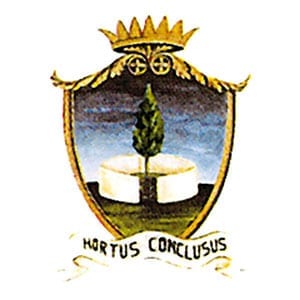 The Latin name of lake Maggiore was Cusius, it was modified during the medieval period in “Lago di San Giulio” (the lake dedicated to S. Julius). The name Orta is a modification of the Latin hortus conclusus.

overlooking the lakefront are some 19th century neoclassical buildings with blooming gardens full of azaleas and camellias. Entering the borgo you’ll admire some elegant 16th-17th cent. buildings, with openings and gardens. Piazza Motta is closed on three sides by porticos, under which there are small shops and café terraces with tables near the shore and some beautiful Renaissance buildings, such as Palazzo della Comunità della Riviera (1582), a symbol of the long self-governance period of this community.

Other buildings worth of a visit are: Casa Olina, the Hospital (1602), Casa Monti Caldara (17th century) with its lovely wrought iron balconies, an element visible on many houses in the borgo. The 17th century Casa Bossi is today the Town Hall, near it you will find the Oratory of San Rocco (1631) and various 18th and 19th century buildings. At the top of the hill there is the Church of Santa Maria Assunta, built in 1485 and modified during the 18th century adaptation, with a decorated stone portal.

The climbing street of the Motta has on the right side the fifteenth-century House called the House of the Dwarves because above the wooden architrave there are four small windows, and almost opposite, another ancient residence of the sixteenth century;  on the left, the Palazzo De Fortis Penotti with its beautiful neoclassical façade and on the right Palazzo Gemelli, late Renaissance. On the summit of the climb,  the Church of Santa Maria Assunta, built in 1485, whose present appearance reveals an eighteenth-century adaptation. Walking along the walls of Palazzo Gemelli you can start along the climb that leads to the cemetery of San Quirico and then to Sacro Monte.

Last stop is the Island of San Giulio, which is about 400 m from the shore. Seen from the lake, the high bell tower of the basilica, the gardens, the linden houses seem to form an enchanted palace that rises solitary among the ruins of the castle. A large part of the island’s surface is occupied by the Seminary (1844). The basilica has undergone changes at different times. On the site of the original church founded by San Giulio in 390, another church was built in the year 800, later damaged in the X century. Of this ancient structure only the apse remains, while the naves were built in the X and XI centuries. The magnificent ambo dates back to the beginning of the 12th century, made of local carved stone (the same as the portal of the parish church) and considered one of the most valuable examples of Romanesque art in Italy. The four columns, different from each other, support parapets decorated with a dense weave of sculptures. Finally, you can admire the frescoes (XIV-XVI centuries). Leaving the church, a road runs along the entire island. Towards the lake there are the ancient houses of the canons, today private residences.

What is “BORGO”. The literal translation of Borgo in English would be “Village”. But the term Village does not fully explains what a “Borgo” is. A “Borgo” is a fascinating small Italian town, generally fortified and dating back to the period from the Middle Ages to the Renaissance.
Category: Piemonte2 January 2018