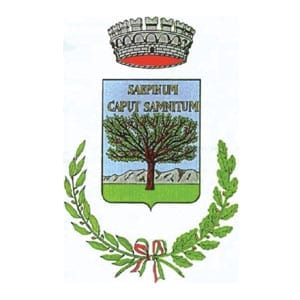 Saepinum derives from saeptum, meaning “fence”, due to the existence, in Samnite epoch, of a fence of wood which closed the area for the animals along the trail.

Sepino was born as a place where flocks and shepherds who travelled could stop and rest. Because of the Samnite wars, the inhabitants escaped on the mountain Terravecchia, where they built a city said by Livio to be “very strong and very powerful”; however, it was soon conquered by the Romans. They built the new city by adapting the cardo and decumanus to the preexisting roads. There are four gateways in the city wall circuit. You can start your visit from the Porta Tammaro archeological area, where a group of stone-walled houses surround an arc structure; near the right side of the door there is a foul, symbol of virility and magic. Continuing along the walls you’ll find the north tower and the theater, the most monumental building of the Roman city, surrounded by eighteenth century farmhouses, built by farmers and shepherds using slabs and stone quoins from the same theater. Built in the I century A.D., the theater could seat up to three thousand spectators. In the summer the velarium was raised to protect the audience from the sun. Just outside the walls you can see the funerary monument built for the death of the wife and son of Publius Numisisus Ligus, chief captain of the soldiers in the third legion of Augustus: a family tomb. You’ll then arrive to Port Boiano, the best preserved one. On the outside it is possible to notice the keystone with a bearded character in relief, perhaps Hercules; two statues of Germanic prisoners in chains; the financiers of the opera, Tiberius and Drusus, adoptive sons of Augustus. To the left, behind the city walls, there were the thermal baths, whose mosaics are conserved in the museum in Port Benevento. Continuing along the decumanus maximus, on the right side there are the temple, the Macellum, i.e. the market, the court and, at the crossing with the cardo, the basilica, formed by a single central nave; then, the forum, the fountain and the residential area. Behind the forum, you can admire a monumental arch, and continuing along the cardo you will reach Porta Terravecchia. On the left side of the decumanus, come in order the comitium, i.e. , the room devoted to meetings, the curia in which met the senate of the city, the temple of Jupiter dedicated to the emperor Constantine, and under that, the fullonica, a place dedicated to the manufacturing of woolen cloths and the tanning of hides; then, the public baths of the forum, a domus called house of the impluvium sannitico, the Grifo fountain, the water mill. You’ll end the visit in Port Benevento, with the two towers to the sides and the decorative elements corresponding to those of Boiano Port. Beyond the door, is the mausoleum of the magistrate Caio Ennio.  The city walls (from the ninth century) of the historical center of Sepino have become part of the houses, but two doors and three cylindrical towers are still visible. Some buildings, such as the eighteenth century palazzo Giacchi and the renaissance palazzo Attilio, with elegant windows and portals in pink stone, give an elegant touch to a more rural architecture, without many stylistic pretensions. The church of Santa Cristina is the most precious monument of Sepino, which survived the earthquake of 1805. Its story begins in 1099, when two pilgrims directed to the Holy Land brought the relics of Santa Cristina. In the inside, there are the tomb of the bishop Attilio (1536); two altars in eighteenth century marble with multi coloured inlays; the chapel of St. Charles Borromeo (1737); the Chapel Carafa.

The local cheeses are excellent, such as caciocavallo, manteche and scamorza as well as pork meat delicacies such as soppressata, sausage with fennel and capocollo. Home-made pasta (tagliatelle) with chickpeas, beans or beans. Rabbit. Stewed Polenta with meat sauce.

What is “BORGO”. The literal translation of Borgo in English would be “Village”. But the term Village does not fully explain what a “Borgo” is. A “Borgo” is a fascinating small Italian town, generally fortified and dating back to the period from the Middle Ages to the Renaissance.
Category: Molise19 December 2017