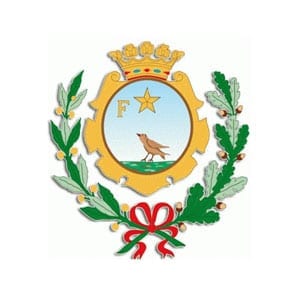 The name could derive from Frosinone, referring to a colony of immigrants coming from this city. The many Churches and Benedictine monasteries of the area also reveal a connection with the towns of Frosinone and Montecassino. According to another hypothesis, the name may derive from the Frisian, the bird that appears in the municipal coat.

Located at the foot of a mountain of beech trees and green pastures where cows and sheep graze in freedom, the Borgo has preserved its bucolic charm. The visitor is struck immediately by the stunning cliff Morgia Quadra with its bizarre -shaped rocks and stalactites. You can start your visit from piazza Alessandro Volta and the nineteenth century and monumental Fonte Grossa with its lion head-shaped gargoyles. This limestone fountain bears the municipal coat with the Frisian bird. The monument to the pastor reminds the visitor that this was a place of transhumance on ancient tracks.

Strolling along the paved streets of the Borgo you can admire the Church of Santa Maria Assunta, slightly elevated with a baroque façade. Inside, there are six side altars and two paintings by Giacinto Diana (1731-1804). Descending from the double staircase, you will find the opposite palace where the museum of Costume is hosted. Going on, the house of the Shepherd is the demonstration of the skill of dairymen and the excellence of their cheese. A few meters below, the church of St Peter and Paul is worth a visit, with two beautiful paintings by the sculptress Amalia Dupré (1842- 1928). You can also visit the museum of blades where the master craftsmen of Frosolone show the ancient art of “forgiar le lame” (blade forging). Arrived in largo vittoria, you will be surprised by the Provençal square, with the large lime tree, the geraniums adorning the windows and the stone cross dated 1660, restored in 1825, with two lions in Romanesque style. Near another crossing, in a small widening there is the monument to the cutting tools, the small church of San Rocco, with two small side naves, an ancient organ and a wooden statue of the saint. Going on you’ll reach the convent of the Capuchins built in 1580 and closed in 1811. The church of Santa Maria delle Grazie, dated 1533, shows the most remarkable work of art of the Borgo: the magnificent altar in inlaid and carved wood with nine wood paintings and two canvas by the Umbrian school, dated between XVI and XVII century. The area around the church of San Michele Arcangelo, the oldest place of worship in Frosolone, is worth a visit as well. Just outside the Borgo, along the road that leads to the mountain, lays in absolute peace the small hermitage of Sant’Egidio.

There are two products of excellence: knives and scissors – the art of “cutting tools” handed down from generation to generation – and the production of dairy.

Sagne e fagioli (a type of handmade pasta with beans) is the traditional dish, that even in restaurants is still cooked in a crock pot of terracotta. Other traditional dishes are polenta with chicory and  pizza di grandinie, minestra di cascigni and peppers with baccalà.

What is “BORGO”. The literal translation of Borgo in English would be “Village”. But the term Village does not fully explain what a “Borgo” is. A “Borgo” is a fascinating small Italian town, generally fortified and dating back to the period from the Middle Ages to the Renaissance.
Category: Molise3 January 2018