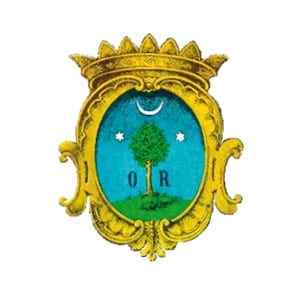 The borgo was first called Loretinum (XII century); the name changed in Ratino (XV century), then it became Loratino and finally Oratino. The origins of this word are still unknown.

According to the parish priest of the early twentieth century, the place name has the Greek root or- from the Latin word Oratenus, meaning first “visible from everywhere” and then “panoramic point”.

The talented local craftsmen could express their art mainly thanks to the patronage of the Giordano Dukes (VI-VII century). Portals, balconies, balustrades of the aristocratic houses, as well as the interior of the churches represent the noble work by local blacksmiths, stonemasons, gilders, glaziers and painters.

A historian described Oratino as “a place where many arts in perfect taste are cultivated” (1781).

In fact, there are no other towns in Molise that can boast such a concentration of artists and artisans. Many of them trained in Neapolitan school and left traces of their work until the areas of Capitanata, Sannio Beneventano and Abruzzo.

You can start your visit from the Church of Santa Maria Assunta, in the old town. The building was already reported in a document dating back to 1251. The church was renovated several times, especially after the earthquake of 1456; the vault of the nave preserves a fresco representing an “Assunzione della Vergine” by Ciriaco Brunetti completed in 1791. The rocaille style (an artistic style preceding Rococò) used by this artist from Oratino emerges particularly in the preparatory studies for the decorations of vaults, ceilings and trompe-l’oeil.

Out of the borgo you can visit is the Church of Santa Maria di Loreto, where you can admire the applied art of carving. Here are two interesting statues representing a Madonna del Rosario (XVII century) by the sculptor Carmine Latessa, and a Sant’Antonio Abate by Nicola Giovannitti (1727). This is a typical country church, expanded in length throughout the present rectory during the first half of the nineteenth century, while the façade dates back to 1718. The vault of the nave and the two side aisles were painted by Ciriaco and Stanislao Brunetti.

Coming back to the borgo, you’ll get to the Ducal Palace; designed as a fortified castle in the fourteenth century, it became an aristocratic mansion (XVIII century) and today, unfortunately, is privately owned.

Magnificent stone portals, such as the Doge’s Palace and Casa Giuliani, lead us to remember other fine artists from Oratino: the stonemason Domenico Grandilla, the sculptor Silverio Giovannitti, the gilders Giuseppe Petti, Agostino Brunetti and Modesto Pallante, as well as the painters Franco Brunetti, expression of the late Mannerist culture, and Niccolò Falocco, with his sanguine paintings full of “chiaroscuro” effects, who is indicated as a pupil of Solimena, the greatest exponent of early eighteenth-century Neapolitan painting.

Going on via Piedicastello, or walking along Piazza Giordano on a summer night, or even looking out to the viewpoint to admire the Biferno valley, you can catch something mysterious about this place. As if the excellent local worked stone, engraved and lost in the vicissitudes of the centuries, such as the medieval tower that stands alone and broken on a precipice, represented the eternal repetition of transhumance.

The high rock defended by Samnite walls still oversees the ancient paths of flocks, the ways of grass that go down following the natural conformation of these places.

The Biferno Valley is an area of great gastronomic tradition. Among the first courses there is a soup of small lasagne and beans. Among the second courses, special mention for the typical cacio and ovary with sausage, i. e. a mixture of goat cheese and eggs cooked in the sausage sauce.

Chickpeas, wheat and chickling are the main ingredients of the Lessate, the dish that is cooked on the churchyard on January 17, while bonfire burns in honour of Sant’Antonio Abate.

What is “BORGO”. The literal translation of Borgo in English would be “Village”. But the term Village does not fully explain what a “Borgo” is. A “Borgo” is a fascinating small Italian town, generally fortified and dating back to the period from the Middle Ages to the Renaissance.
Category: Molise8 March 2018