MUNICIPALITY OF MONTECASSIANO
(Province of Macerata)
Altitude
mt. 215 a.s.l.
POPULATION
7001 (990 in the borgo) 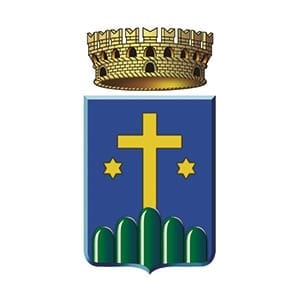 The borgo is mentioned as Castrum Montis Sancte Marie in some old historical documents dated 1151. In the following century it became Montis Sancte Marie in Cassiano. According to some historians, there is a relationship between the ancient Cassiani family, at the origin of the place name, and the even older Cassia Orestina road mentioned in a stone found in 1602 and that dates back to the first century AD. Therefore, there has been a historical continuity here between the Augustan Age and the High Middle Ages.

The medieval Montecassiano, quiet, discreet, so human and loving as to find a benevolent shore in the angelic musicians painted by the rare Johannes Hispanus and which can be admired in the Palazzo dei Priori. On the other hand, the local genius was Venus Ericina, bearer of love, who in Roman times had her own temple here. From afar, the borgo on the hill appears almost mystical. It must be because of the many confraternities that in past centuries have preserved and restored churches and works of art, and that still accompany the processions with their colorful coats of arms, banners and chiseled crucifixes. Perhaps to remind us that life is not only a celebration in the taverns of the Terzieri, but also the dark prison of St. John the Baptist kept in the picture gallery.

The medieval identity of Montecassiano is enclosed within its high walls, built from 1437 onwards, which still surround the historic centre. The urban structure develops in concentric streets that culminate in the central square following the ascending conformation of the hill.

At the entrance of the borgo stands the 13th century Oratory of San Nicolò, which has a bell dating back to 1382 and, inside, 15th century frescoes by the Umbrian-Marche school. Passing through the crenellated Porta di Santa Croce (today Cesare Battisti), you go up to the central piazza Leopardi where the Palazzo dei Priori, the seat of the Municipality, has been rebuilt by Antonio Lombardo in 1467. Today’s appearance is the result of the restoration of 1938 of the battlements and  the large arch connecting with Palazzo Compagnucci. In the upper part of the façade of the Palazzo dei Priori there are three elegant mullioned windows separated by a sculpted column, while in the lower part some octagonal pillars support the loggia consisting of five round arches. Inside, in the Sala Consiliare, there is a Madonna on the throne between Saints and angels musicians of Johannes Hispanus (1506) and a Dream of Jacob by G. Buratto (17th century).

Close to the square are the late neoclassical palazzo Ferri and the architectural complex of the former convent of the Augustinians, inside which the tavern of San Nicolò with annexed tasting center.

The nearby collegiate church of Santa Maria Assunta dates back to the 12th century, but was rebuilt by the monks of the Abbey of Fiastra in 1234 and subsequently modified by Antonio Lombardo. Particularly noteworthy is the terracotta façade with rose window, flanked by a sturdy bell tower adorned with terracotta. Inside you can admire the splendid glazed terracotta altar by Mattia della Robbia, depicting the Madonna with Child and Saints, the board by Giacomo da Recanati with the Coronation of Mary and Saints, the organ of the Callido of 1775 and, in the sacristy, the stationary cross of Lorenzo d’ Ascoli (1414) and the reliquary of the Holy Cross of the XIV century.

The itinerary continues with the nearby church of San Marco, which was completely renovated in the eighteenth century, where you can find paintings from the seventeenth century and an Archaeological Collection rich in Picenian finds.

Near Porta Diaz is the seventeenth-century church of San Giacomo, which today houses the Confraternities. On the main altar there is a beautiful fresco dating to  the first half of the sixteenth century depicting the Madonna on throne with Child and attributed to Vincenzo Pagani.

Within the city walls, three historical courtyards have recently been recovered: the cloister of the Augustinians, where the tasting centre is located; the garden of San Giacomo, a true corner of peace and serenity; and finally the courtyard of the monastery of the Poor Clares, which boasts a building system dating back to the twelfth century. All three courtyards are at the service of the taverns on the occasion of the Palio dei Terzieri.

Entering the historic centre through Porta San Giovanni, you will find a staircase (via Roma) from which you can reach the recently restored church of San Giovanni Battista, seat of the Museum of Sacred Art and part, with the former convent of the Poor Clares (now secondary school), of the largest urban complex in the city centre.

In addition to vincisgrassi, you must try beans with pork stews and tajulì pilusi, hand-made tagliatelle with water, flour and salt, excellent with the duck sauce.This dish can be tasted on September 1st during the feast of Sant’ Egidio.

Among second courses, rabbit in potato and stockfish with potatoes. The sughitti is a kind of sweet polenta with must, corn flour and walnuts, a typical dessert of the peasant civilization celebrated during October festival.

On the third and the fourth Sunday of July, the Palio dei Terzieri is organized by the association with the same name, for the rediscovery of  the cultural identity of Montecassiano through the historical reconstruction of an event dating back to the middle of the fifteenth century, namely the competitions held by crossbowmen on the occasion of the feast of St. Bartholomew. As in the past, there are games and challenges, accompanied by traditional markets and tasting of typical products in taverns and inns, parades in historical costume.