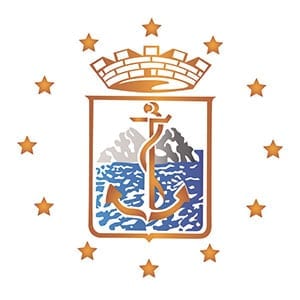 The Phoenicians, the ancient Greek population devoted to Hercules, gave the name to the place in which they recognized a similarity with the bay of their native land. For others, the name comes from the Etruscans, as the necropolis located upstream of Cala Galera, located in the area of the Etruscan zodiac corresponding to the constellation of Hercules, would demonstrate.

Porto Ercole is a coastal borgo that became extremely powerful under the Spanish government. In fact, in the mid-sixteenth century, it was annexed to the new state of the Presidi, the defensive system of the port was reinforced, the fortress built by the Sieneses enlarged and three forts by the names Filippo, Stella and Santa Caterina were raised.

The first fort you can see, coming from Orbetello, is Forte Filippo, built by Giovanni Camerini in 1558 on behalf of Philip II; the battlements that develop around the moat are still walkable. The tower of Il Mulinaccio dates back to the same period,  while Forte Santa Caterina dates back to the eighteenth century. The walls, erected in the second half of the XV century on preexisting structures built by the Aldobrandeschi of Sovana, still enclose the historical centre, which is accessible through a Gothic door surmounted by the clock tower.

The square of Santa Barbara offers a panoramic view of the port. The cavity inside served as a depot for ammunition, and allowed direct access from the sea. On the square you can admire the Governor’s palace designed by Baldassarre Peruzzi and commissioned by Agostino Chigi, when, at the beginning of the sixteenth Century, he got Porto Ercole from the Republic of Siena, later becoming the residence of the Spanish government.

Through a series of narrow streets you will reach the heart of the Borgo, the church of Sant’Erasmo. Erected in the fifteenth century by the Sieneses and expanded under the Spanish dominion, it has a simple façade in Tuscan style designed by the architect Bernardo Buontalenti. Inside, the nave terminates in a square choir. The Baroque altar made of polychrome marble rests on the tombstones of the Spanish governors. On a side nave altar stands an Assumption of the Virgin by the Neapolitan school.

Nearby, in the ancient Church of Santa Croce, now deconsecrated, probably Caravaggio died. The symbol of the confraternity- the two crosses – decorate the jambs of the portal, made of Argentario limestone.

The majestic Rocca Aldobrandesca dominates the old town, with its gardens, wells and narrow streets. The first building dates back to 1296. It was rebuilt in the mid-sixteenth century by order of Cosimo I de’ Medici, who added its bastions and ramparts to the previous structure. On the northeast corner of the fortress rises the nineteenth century lighthouse.

The church of San Rocco is accessible by a small portico, erected on the site of an ancient hermitage and restored in the Eighteenth Century by the Spanish governor Don Antonio Perez. The simplicity of the façade corresponds to a single chambered interior, brightly painted.

Continuing on the panoramic road, just outside the borgo, you will reach  Forte Stella, so called for its six pointed star shape. Rising on a hilltop, it allowed the sighting of the enemies from different points. Its construction, which began in the second half of the Sixteenth Century, was completed only a century later.

On a hill on the west of Porto Ercole rises the fifteenth century water tower, while along the coast to the west you can see the Avvoltore tower.

Next to Porta Senese, on the main road that leads to the borgo, the Corsini garden, built in 1868 by Vincenzo Ricasoli, was one of the first “acclimatisation gardens” in Italy. It hosts approximately 150 tropical and subtropical species.

The local gastronomy is linked to the sea and fish is the main ingredient of all dishes, always accompanied by a glass of Ansonica, the white local wine obtained from the homonymous autochthonous grapes. The oldest and most traditional soup is sarde e patate. In the restaurants menus you can also find the langoustines soup, the red mullet, stewed and the stocchetto alla portercolese with potatoes, pine nuts and black olives. The typical Easter sweet is the pastiera, in a version without wheat.

What is “BORGO”. The literal translation of Borgo in English would be “Village”. But the term Village does not fully explain what a “Borgo” is. A “Borgo” is a fascinating small Italian town, generally fortified and dating back to the period from the Middle Ages to the Renaissance.
Category: Toscana5 January 2018