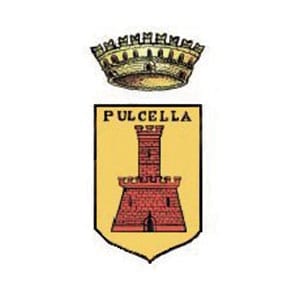 The name probably derives from the Latin word Paucinius (Paucinio’s property); the suffix –igo probably has got Celtic origins. There is also a legend about the origin of the name: Charles the Bald gave this territory, as a gift, to a beautiful girl (the daughter of a French count); in fact Pucelle in French means “young girl”.

The castle is the most important building of the Borgo, rising on the top of a hill and dominating the whole valley. It resisted, for four centuries, against wars and invasions; but, destroyed by a fire, it was rebuilt between 1738 and 1770 and it was converted into a Venetian villa by the Venetian architect Matteo Lucchesi and it was also connected to the Borgo with a 365 stone steps staircase.

The building that houses the theatre was built in the 16th century and it was originally named ”Theatre of Polcenigo’s Counts”.

Between the Borgo and the castle there is the  ancient Church of St. James, built in 1262 but later influenced by all the new artistic tendencies.

The oratory of San Rocco dates back to the fourteenth century and bears traces of seventeenth-century renovations. Its massive bell tower was probably obtained from the transformation of an ancient tower of the town walls.

The church of Ognissanti, founded in 1371, is the result of various changes and  has a rectangular hall without a separate presbytery and with a sacristy behind the altar.

The current shape of the church of San Lorenzo, founded in the thirteenth century, is the result restoration work carried out between 1890 and 1908. The interior, with a single nave, houses a tabernacle and an altar by the eighteenth-century Portuguese Giovanni Battista Bettini and a seventeenth-century altarpiece of the Trinity by Tiziano Vecellio known as “Tizianello”, descendant of the homonymous painter from Cadore.

The church of San Giovanni, of ancient origin and enlarged at the beginning of the twentieth century, preserves a sixteenth-century painting depicting the Trinity, an eighteenth-century canvas by Egidio Dall’Oglio, two paintings by the Friulian painter Don Sebastiano Valvasori from the early nineteenth century, and two altars by Antonio Nardi made between the eighteenth and nineteenth centuries.

On the top of the hill, there is the parish church dedicated to San Floriano, its current structure consists of a square pronaos and a rectangular hall completed, to the east, by a semicircular apse. The wall decoration, unfortunately fragmented,  of the hall and the apse is remarkable. The  frescoes (late 14th – early 15th century) may be attributed to the school of Vitale da Bologna or Tommaso da Modena.

Finally, you can not miss a visit to the  site of Palù di Livenza, included in the UNESCO World Heritage Site since 2011.

Wicker baskets, used during the grape harvest, is the historical local product, but the most used was a different type of wicker basket, useful to carry the laundry.

The local specialty is a local fish called Trota dell’alto Livenza (trout from the Livenza river).

What is “BORGO”. The literal translation of Borgo in English would be “Village”. But the term Village does not fully explains what a “Borgo” is. A “Borgo” is a fascinating small Italian town, generally fortified and dating back to the period from the Middle Ages to the Renaissance.
Category: Friuli - Venezia Giulia5 January 2018