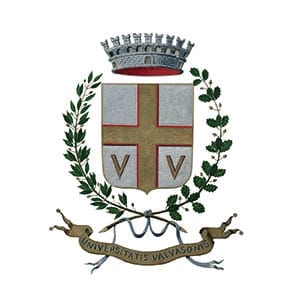 The name derives from the ancient German wal (“rise”) and waso (“lawn”), and means “hilly meadow”.

Valvasone lies on the right bank of the Tagliamento river in the Friuli plain, near an ancient ford. The visit starts from Palazzo Comunale, an elegant eighteenth-century building, which overlooks Piazza Mercato and incorporates some former medieval structures.

Opposite is Palazzo Martinuzzi-Dulio that, despite a restoration carried out in 1846, still bears signs of the Venetian Renaissance. Behind this, the elegant Palazzo Fortuni with its scenic seventeenth-century façade faces the Church of Santi Pietro e Paolo,  which  was first documented in 1355, when it was flanked by a hospital for wayfarers. It was consecrated in 1497 and houses frescoes by Pietro da Vicenza (1510) these frescoes partly cover some older fourteenth-century paintings of which traces of the Crocifissione (Crucifixion) can still be seen, and a small, rare, seventeenth-century organ.

Continuing up the street, you will notice a nice group of porticoed houses with frescoed façades (1515) which, according to popular belief, were to protect from the plague.

Going towards the church, in Via Roma, you can see the late eighteenth century Palazzo Pinni. Carrying on, you will get to the former Convent of the Dominicans, one of the oldest buildings in Valvasone: the church, completed around 1355, had a convent added, that was consecrated in 1500 after it was plundered by the Turkish.

What remains of the whole complex is part of the cloister which faces the brolo (the orchard and the kitchen garden of an abbey) and overlooks the countryside.

Carrying on along the road running through the irrigation canals of the mills is a beautiful sixteenth-century portico and the ancient “Trattoria alla Scala”, with its stone portal bearing the date 1672 on the keystone.

Finally you get to Piazza Libertà, a large square with the cathedral and a series of buildings like the one that housed the eighteenth-century spinning mill, with a circular structure. The cathedral was built in 1449, thanks to the donations made by the inhabitants and by the nobles of Valvasone, and was consecrated in 1484; it has a neo-Gothic façade dating back to the late nineteenth century and  offers ancient treasures, such as the two seventeenth-century frontals and a perfectly functioning organ by Vincenzo de Columbis (1532-38), that is considered to be one of the most beautiful works of art in Friuli, the only sixteenth-century Venetian organ that exists today in Italy.

Leaving the cathedral, in Via Erasmo you will find Palazzo Flora, whose original fifteenth-century structure has undergone some late seventeenth-century modifications, and Casa della Pieve, a Renaissance building that incorporates the fourteenth-century Chapel of San Giacomo with its traces of frescoes from the same period.

Nearby is one of the most beautiful corners of the borgo,the seventeenth-century bridge over the irrigation canal just behind the beautiful Renaissance Palace of Count Eugenio.

In addition to this building, other important examples of fourteenth-sixteenth-century architecture overlook Piazza Castello. Casa Trevisan, with its vast room that houses the old Trattoria La Torre and the porticoed Palazzo Gandini.

Next is the castle, which is now being restored, a vast complex dating back to 1206 that dominates the square of the borgo. The ground floor hall is decorated with sixteenth-century frescoes, there is also a lovely theatre from the eighteenth century which will be included in the restoration project.

Leaving the square and passing by the tower with its gate you will reach Borgo Alpi which is called “delle Oche” (“of geese”) thanks to its agricultural calling; on the way you will see the old mill, which used water from the defensive canal, and in Largo Piave the seventeenth-century Palazzo Tamburlini with its two long chimneys.

In Borgo delle Oche, the most pleasurable way to end your tour is with a glass of Traminer wine in the wine-bar that opens onto the surrounding vineyards.

The local product is traditionally made with cheese from unpasteurized milk, from cows that are fed according to tradition.

The most important product from the Dairy Cooperative is the Erasmo cheese, i.e. Montasio Dop.

Don’t forget the wine, such as the Grave of Friuli DOC, salami prepared with vinegar, excellent with roasted polenta, and the bread baked cooked in a wood-burning oven.

What is “BORGO”. The literal translation of Borgo in English would be “Village”. But the term Village does not fully explain what a “Borgo” is. A “Borgo” is a fascinating small Italian town, generally fortified and dating back to the period from the Middle Ages to the Renaissance.
Category: Friuli - Venezia Giulia23 February 2018