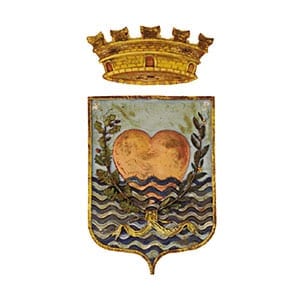 The name is the fusion of two neo-Latin words: corte (important agricultural complex) and guado (ford).

The current fortified area of Cordovado, known as the Castle (XI century), is the result of changes and stratifications that have occurred over the centuries time, in particular between the seventeenth and nineteenth centuries. In the late Middle Ages, the outer circle of walls, with an embankment, moat and two gate towers still present today, enclosed an inner space consisting of the bishop’s castle, in turn equipped with walls and moat with drawbridge, donjon and other buildings. Next to it stood the borgo.

The medieval Cordovado is therefore concentrated in the castle area, where you can admire some interesting buildings such as Palazzo Ridolfi, the old house of the captain, namely Palazzo Bozza Marrubini, frescoed internally by Francesco Zimolo (1704-1712), the elegant Renaissance-style Palazzo Agricola with large arches and three-mullioned windows. Inside the walled circle is also Palazzo Freschi Piccolomini (1669-1704), an imposing Renaissance structure with three floors and a large portal, and surrounded by a beautiful park.

Nearby, near the north gate, stands the church of San Girolamo (14th century). Of the two gate towers, the southern one preserves the postern, the northern one, also known as the clock tower, the stairs and the wooden walkways inside.

Along the stretch of the south-eastern walls you can see the remains of the moat and the houses built inside the enclosure in the nineteenth century. At the end of the seventeenth century part of the fortified apparatus was demolished or transformed into a civil residence, thus giving life to the palace Freschi Piccolomini.

The last description of the castle that belonged to the bishops of Concordia dates back to 1856, just before it was finally demolished.

The sanctuary of the Madonna delle Grazie (1603) is a jewel of Baroque art, with an octagonal plan and a splendidly carved and gilded ceiling by Cataldo Ferrara (1656-58), the oval paintings by Antonio Carneo with figures of Saints and Prophets, the stucco statues by Andrea dell’Aquila and the paintings by Antonio Moretto.

The tour can be completed with the ancient Franciscan convent of Santa Maria di Campagna, which has become Villa Freschi, and with the Oratory of Santa Caterina, which preserves 15th century frescoes .

The Spaccafumo  is a local handmade sweet with dry figs, raisin, walnuts, almonds, hazelnuts, pine nuts, honey and fried rice balls. The Lenga is the traditional dish: cotechino (gelatinous pork sausage in a natural casing) cooked for a long time together with pork tongue, then sliced and served with cornmeal mush and vegetables.