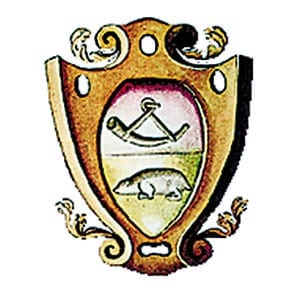 The borgo name was first mentioned in 1811 as Camerata (1181) and in other documents of the same period  the name Cornello appears as well.

Cornello dei Tasso is one of the Borgos of the Bergamo District that has best preserved its medieval structure. It was a the center of the trade with the Valtellina along the Via Mercatorum, and it had an important market.

At the end of the 16th century its commercial fortune began to decline, due to the construction (1592) of the new valley road that isolated the borgo. Its centuries of isolation helped it to preserve its ancient soul.

In the lower side, a number of buildings are aligned horizontally, near the overhang, a peculiar disposition of fortified towns.

On the upper side there is a street with porticos, stone arcades, wooden beams, paved cobblestones. This is the most attractive part of the Borgo. On different levels there are workshops, stables, houses, palaces and a church.

The church dominates the borgo, its bell tower with mullioned windows is one of the few examples of Romanesque architecture in Val Brembana. It was built in the 12th century but it was often remodeled during the following centuries. Beautiful frescoes were discovered during the restorations: religious and artisans and local noble families daily life.

Formai de mut  is a local certified cheese produced in a winter and in a summer version.

Other traditional certified cheeses of the Val Brembana are: Branzi, Agrì, Formagella, Stracchino and Salva, and Taleggio, the most famous of all, produced since the 10th century.

Worth to be tasted are the Casonsei, fried ravioli, a kind of hand-made pasta filled with cheese, eggs, garlic, parsley and bread crumbs, served with butter and sage. Polenta cunsada is a kind of polenta served with fresh taleggio cheese. A typical dish is also the chisöl,  polenta rolls with a filling of taleggio toasted on the top of a hot stove.

What is “BORGO”. The literal translation of Borgo in English would be “Village”. But the term Village does not fully explains what a “Borgo” is. A “Borgo” is a fascinating small Italian town, generally fortified and dating back to the period from the Middle Ages to the Renaissance.
Category: Lombardia9 January 2018