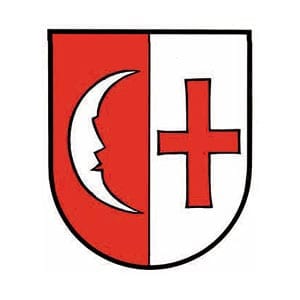 The name derives from Endidae, an old coaching inn, an important Roman small settlement on the Via Claudia Augusta. In 1018 it is documented as Enna , in other documents dated  1170 we find the names Enn or Enga, and then the name changed in Burgum Novum de Egne (in 1189). In the XIV century this trade center used the German name Newenmarcht, later Neumarkt.

The porticoes of the houses aligned along the street give this ancient ”market town” a picturesque look. They are used nowadays, as in the past, for commercial and social activities. Along the main road ran the Ritsch, a drainage channel carved out of white marble blocks, into which the waters of the Rio Trodena and the drained waters of the porticoes flowed. The old street is characterized by typical houses called “case a sala” (Saalhäuser), whose porticoed façade face the street, and have courtyard and warehouses in the back of the building . The main façade is porticoed and facing the street, while the courtyard is behind, with buildings used for agricultural and commercial work and warehouses.  These houses are often equipped with Erker, a kind of balcony.

The central road ”Andreas Hofer” is named after the name of the local patriot. The Museum of Popular Culture was born from the private collections of Madam Anna Large Mueller, the museum shows the life of a bourgeois family, between 1815 and 1950, through objects of daily use and a faithful reconstruction of domestic rooms of that time. The last restoration has made the Ballhaus the headquarters of the municipal library in German language (Bibliothek im Ballhaus). The church with Romanesque origins is dedicated to St. Nicholas (patron saint of sailors).

South of the historic center, frescoes and ogival windows are all that remains of the St. Gallen church, mentioned already in 1202 with the nearby hospital. There are also palaces and mansions built between the fifteenth century and the beginning of the XX to be mentioned; among these: Hotel Posta, the headquarters of the Town Hall (baroque style), the church of the Quattordici Santi Ausiliatori built together with the convent between 1618 and 1621.

Other places not to be missed are: the archaeological site ”Endidae”, the  ”Schloessl” residence (at the top of a hill surrounded by vineyards), the church of ”Nostra Signora in Villa” and the church of San Floriano.

An exceptional Blauburgunder (Pinot Noir wine) is produced in the hamlet of Mazon. The hills around Egna are known for the apple production. The main dishes are: Canederli (with speck ham, cheese or liver); Schlutzkrapfen (handmade pasta filled with ricotta cheese and spinach); cornmeal mush (with cheese, meat stew or mushrooms); barley soup with vegetables and bacon;  Gröstl (roast potatoes with pieces of meat). For dessert:  Strudel (filled with apples, raisins and pine nuts) and then the Strauben (mixture of flour, milk and eggs, served with jam of cranberry), the Kaiserschmarren (omelet with raisins); the Topfenknödel (sweet canederli with ricotta cheese) and Marillenknödel (potato dumplings with plums or apricots and cinnamon).

What is “BORGO”. The literal translation of Borgo in English would be “Village”. But the term Village does not fully explain what a “Borgo” is. A “Borgo” is a fascinating small Italian town, generally fortified and dating back to the period from the Middle Ages to the Renaissance.
Category: Trentino - Alto Adige9 January 2018