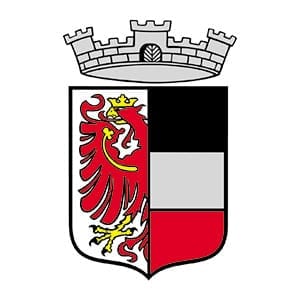 The borgo rose on a swampland, it was initially peopled by a native population known as the “Rhaetians” (later subdued by the Romans). The borgo uses, since 1163, the  pre-Roman name Glurnis (or Glurns) that means ”the river bank of the hazel trees”.

With its 885 inhabitants, Glorenza is one of the smallest towns in Europe. The city walls (the last town fortification still intact in South Tyrol) surround an urban plan with medieval origin, although the 16th century architectural style prevails. After the destruction in the battle of Calven (1499), the military architect Jörg Kölderer proposed to the emperor Maximilian a plan to enlarge the city walls with gateways and semicircular towers. This important restructuring plan was accepted and then completed in 1580.

The former law court was constructed around 1510 by order of the jurisdiction officer Jörg von Liechtenstein in a garden west of the Flurin tower.

Castel Glorenza is the name given to a noble residence of the 18th century, it was incorporated into the new fortified walls in 1510 with its internal courtyard, its tower and its residential wing.

Casa Frölich is a refined corner house completed in 1570, after a long period as a property of the Matsch counts. It is decorated with the blazons of Balthasar Frölich and his two wives. The painting on the rear façade illustrates medieval allegories of the seven deadly sins.

The adjacent building has got a beautiful Renaissance style main door decorated with intersected sea horses. In Piazza Città the knight Reinprecht von Hendl ordered the construction of his three floors residence (1562). Today, totally restored, it has become the Corona Hotel.

Other beautiful buildings are Casa Gebhard in Via Argento, with its decorated windows, and the Hössische Behausung, next to the Malles gate. Torre Flurin and the annexed constructions were the tribunal headquarters. The tower was also housed the prison between 1825 and 1931.

The current town hall building, classed as noble residence in 1604 under the name of Ansitz Hendlspurg, was constructed between 1573 and 1591.

The Church dell’Ospedale, dedicated to the Virgin Mary, was built between 1665 and 1669 after the ancient Church of the Spirito Santo was destroyed by a fire in 1664. The church of Saint Pancrazio is decorated in three different artistic styles: Romanesque, late-Gothic and Baroque.

Outside the walls there is the church of S. James al Maso Söles, a late-Gothic construction (1570-80) built by the Bishop Prince of Salzburg Johannes Khuen-Belasi.

Do not miss to taste an excellent speck (smoked ham) and a rye bread called Calva made with spelt flour and Val Venosta’s apples.

Glorenza’s menu is completely Tyrolese: it starts with a fragrant appetizer of speck, cheeses and rye and buckwheat bread, followed by a tasty country soup or by the typical canederli aka knödeln (dumplings). Main courses are based on meat (pork or lamb), served with very sweet potatoes. To complete the meal we suggest homemade cakes with soft fruit, krapfen (a kind of donout) filled with jam, and strudel.

What is “BORGO”. The literal translation of Borgo in English would be “Village”. But the term Village does not fully explain what a “Borgo” is. A “Borgo” is a fascinating small Italian town, generally fortified and dating back to the period from the Middle Ages to the Renaissance.
Category: Trentino - Alto Adige21 March 2018