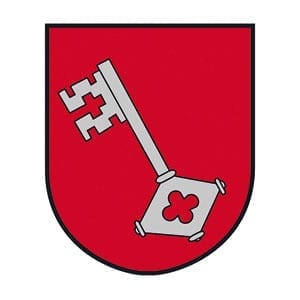 The borgo has an Italian and a German name. Chiusa is the Italian name deriving from the narrow natural passage located between the cliff of Sabiona, the Isarco river and the Tinne torrent. The German name is Klausen and derives from the Middle High German (the German language between years 1000 and 1300) word kluse, meaning “closed” (“chiusa” in Italian). Since 1300 it has been called Klausen.

The long road passing through the borgo is the first attraction of Chiusa. It connects the old center of Città Alta (the upper borgo) with Città Bassa (the lower side).

You can start your visit from the Wegmacher house and the Church of the Apostles, with a Gothic style and a single nave, built by the master builder architect Jörg in the latter half of the 1400s; the Town Hall, the complex of the old Leone d’Oro hotel (today an elementary school), and the Episcopal Customs House date all back to the late Middle Ages.

The  façade of the Albergo Walther von der Vogelweide with  its battlements is very peculiar. Another old building is Albergo Agnello (Zum Lamm), first mentioned in 1460. On the first floor there is a room called “Walther Room”, it was the favorite meeting place of internationally famous artists in the second half of 1800.

The houses in Città Alta are high and narrow to gain space. There is a romantic view of the river from the back of these houses, with gardens and balconies decked with flowers. Città Alta ends at Piazza Parrocchia, with the Church of Sant’Andrea, a late Gothic building (1482-98) built over the remains of a former Romanesque building, considered one of the most beautiful Gothic churches in South Tyrol. Opposite the Sagrestano Tower there is the Chapel of the Crypt, built in 1439.

From Piazza Parrocchia you walk towards the Città Alta (Lower Town), where you can admire the beautiful signs that marked the hotels. The picturesque alleys here bear the names of the handicrafts.

Worth of note are the Orso Grigio Hotel, the oldest inn in town (mentioned in 1335); the current home of the Cassa di Risparmio bank, the Caffè Nussbaumer (formerly the Croce Bianca Hotel), where during the heyday of the Chiusa artists’ colony there was a special Künstlerstübele (artists’ room) set up with a unique art gallery.

Città Bassa ends at Piazza Tinne. On the other side of the Tinne there is a large public park, where there is the home of the Civic Museum and the Civic Library (formerly a Capuchin convent).

Worthy of a visit on the east bank of the Isarco are: the Seebegg Residence, once the offices of the mining administration, the Canonica and the Griesbruck Residence and  Castel Branzoll on the west bank of the river, along the path that leads to Sabiona.

Excellent wines can be enjoyed at the Cantina Produttori Valle Isarco. These wines are perfect to be tasted with local speck (smoked prosciutto) and typical Tyrolese salami and sausages.

What is “BORGO”. The literal translation of Borgo in English would be “Village”. But the term Village does not fully explain what a “Borgo” is. A “Borgo” is a fascinating small Italian town, generally fortified and dating back to the period from the Middle Ages to the Renaissance.
Category: Trentino - Alto Adige21 March 2018