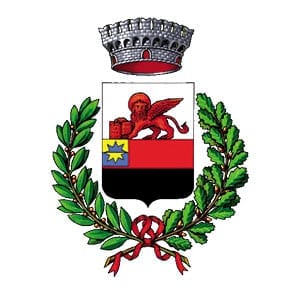 The name derives from Motta Aeniana,, whereas Motta in medieval Latin indicated a small hill (and the castle built on that hill), and Aeniana refers to a mansion (post station) Anneianum mentioned in the Itinerarium Antonini (3rd century AD) and connected to a fundus (farm) Enianus.

The huge wall circuit surrounding Montagnana, reinforced by 24 hexagonal towers with Guelph battlements, has four openings (gateways) and show its grandeur on the north-east side: the same observation point adopted by Giorgione when he portrayed it in the bloodbath drawing of the Boymans-Van Beuningen Museum in Rotterdam. From the “piazzola di Giorgione” you can see the detachment, for colour and construction type, between the 13th century section of the walls and the 14th century section of the walls of the Carrara area, built with trachyte blocks alternating with brickwork.

Next to the defensive curtain, Villa Pisani is the extra-urban residence built in the mid-sixteenth century by Andrea Palladio for the Venetian nobleman Francesco Pisani.  On the other side of the road are more luxurious patrician residences: Palazzo Giusti Sammartini (1756), the fifteenth-century residence of the Gatteschi family and, returning towards the centre, along the opposite side of the street, Palazzo Giusti Chinaglia (fifteenth century, remodeled in the eighteenth century) and then the Venetian loggia, built in the sixteenth century and attributed to Gianmaria Falconetto.

Opposite the villa del Palladio, the castle of San Zeno consists of a rectangular main building, an inner courtyard protected by two watchtowers and a 38-metre high keep overlooking the town centre. This tower, built by Ezzelino in 1242, should be observed, to grasp its solidity, from the southern walls, from where you enter directly into the grassy moat.

Returning to the centre, along Via Carrarese you can reach Palazzo Sammicheli, now the town hall. It was built around 1538 and partially rebuilt in 1593 after a fire. The building project was attributed to the Veronese architect Michele Sammicheli. The Council Hall, with its refined wooden carvings on the ceilings, is the work of Marcantonio Vanin in 1605.

The heart of the city is Piazza Vittorio Emanuele II, embellished by the grey trachyte listón  with white stone inserts, following the example of Piazza San Marco in Venice. The square is overlooked by elegant buildings, such as the Zanella Palace with its refined corolla fireplaces, the 18th century Palazzo Valeri, the Monte di Pietà founded in 1497 to counter the hegemony of the Jewish banks, the Palazzo della Loggia built in 1877, the medieval terracotta building built in 1924 and occupied by the Cassa di Risparmio.

Towards Via Roma there are the nineteenth-century Palazzo Santini, whose colours and decorations celebrate the Risorgimento and the Unity of Italy, and the fifteenth century Palazzo Pomello Chinaglia, considered one of the residences of the Gatteschi’s or of the Pisani’s.

The cathedral (1431-1502) has a late Gothic style on the outside, refined by the white marble portal attributed to Jacopo Sansovino or his school, and a Renaissance character on the inside. The two frescoes on the counter façade depicting David with the head of the giant Goliath and Judith victorious over Holofernes, were attributed to Giorgione on the basis of iconographic comparisons. On the left wall, the canvas of the Lepanto Battle recalls the Christian victory of 1571 against the Turkish army. On the left side of the nave is the chapel of the Rosary with its astrological fresco of the late fifteenth century. On the right wall a Madonna enthroned with Child and Saints framed by an elegant altar in Berici stone, is a sixteenth-century work by Giovanni Buonconsiglio called “il Marescalco”, who also painted the great fresco of the Assumption in the apse basin. At the centre of the apse, the high altar bears the Transfiguration of Christ by Paolo Veronese of 1555.

The church of San Francesco, dating back to the fourteenth-century but with Romanesque elements on the façade, preserves a warm organ of the eighteenth century, frescoes of the fourteenth century and the Madonna and Child with Saints of Palma il Giovane. In Via Matteotti, the fifteenth-century palace Magnavin-Foratti in Venetian Gothic style was perhaps the residence of Giacoma da Leonessa, wife of the commander known as the Gattamelata. The most important elements are the portal in soft stone and the pentaphora on the main floor. The hospital of the Nativity, which already offered assistance to the needy in 1407, has frescoes by Buonconsiglio on the upper floor.

The Rocca degli Alberi, built in 1360 by Francesco il Vecchio Da Carrara, was surrounded by water like a small island accessible only through drawbridges, shutters and gates. The garrisons and blackbirds are a false nineteenth-century. The church of San Benedetto (1771) is in late Baroque style. .

The Berico-Euganeo Veneto DOP ham is the master of the menus. The pig tradition is expressed in numerous dishes, starting with the famous “pasta e fasòi” (beans) with the beaten bacon, to be accompanied with the excellent Merlara Doc wines.