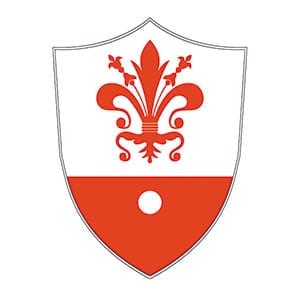 The  name probably derives from the angular shape of the old castle (castrum angular), although according to another interpretation it derives from the gravel (ghiaia in Italian), accumulated by the Tiber River over the centuries, on which the historic center was built.

Anghiari is a splendid Borgo overlooking the Valtiberina, the green valley of the upper Tiber River. In the middle ages, it was a very important fortified center, with its strong 13th century walls and its strategic position.

In the valley below, the famous Anghiari battle took place in 1440: the Florentines here defeated the Milaneses and the famous fresco Battaglia di Anghiari (that unfortunately is lost) was commissioned to Leonardo da Vinci to celebrate this important victory.

The aura of mystery penetrates the medieval scenes, recalling radiant passions and the clashing and clanging of swords. In 1164, Thomas Becket passed through this corner of Tuscany: the Archbishop of Canterbury obtained from the lords of Anghiari the coal cellars of the castle where the Spedalieri di Sant’Antonio built an oratory.

The Church of Sant’Agostino was built in the 13th-14th centuries, later enlarged after the collapsing of the bell tower. The Church of the Badia is even older, it was the Borgo’s first place of worship (9th cent.). The late 14th century wooden Crucifix on the high altar has two details that draw our attention: Christ’s loincloth, with the beautiful decoration painted on the background, and the hair, once long and flowing, but now shorn for devotion.

In the Church of Santa Maria delle Grazie, built between 1628 and 1740 and restored several times on the outside, a glazed terracotta by Andrea della Robbia is preserved.

The imposing Fortress was the nucleus around which Anghiari developed. The Cassero was a defensive place as well as a Camaldolensian monastery, named “Conventone”. The Campano is the bell tower, one of the main buildings of the Borgo. Completed in 1323, it was destroyed in 1502 and rebuilt a century later, when the clock was installed. The most recent restoration was done in the first half of 1800.

Palazzo Pretorio, which stands in the center of the old town, shows signs of its original structure in the façade, with round-arched windows, a large fresco under a loggia, and the terracotta and stone coats of arms. The Palace was part of the fortress and has been the residence of the Podestà (in Middle Ages, the chief magistrate of a city state) and of the Vicars of the Florentine Republic since 1836.

Palazzo Taglieschi is immediately recognizable for its composite façade: it is a Renaissance structure built on former buildings and towers. Palazzo del Marzocco, standing opposite Palazzo Taglieschi, is a 15th century building that formerly belonged to the noble Angelieri family. Today it is entirely restored and it houses the Battle of Anghiari Documentation Center.

The city defensive walls were the road stretching along the northern section of the city walls. Since 1444 this stretch of walls has undergone a number of reconstruction works in order to make the borgo impenetrable in case of an artillery attack. The raising of the walls (contemporaneous with the building of the Sant’Angelo and San Martino gateways, between 1181 and 1204) entailed the incorporation of the medieval battlements, which are still visible in some places. The work for the enlargement of the Church of Sant’Agostino was completed in 1463 with the construction of the unique semicircular tower. Since 1388, the weekly Wednesday market takes palce in Piazza Baldaccio, formerly known as Piazza Mercatale. The Teatro dei Ricomposti was built in 1790 with a Renaissance style façade.

Anghiari is a nest of expert antiquarians who scour the surrounding area in search of precious relics from the past. The classic dish of Anghiari is bringoli: thick spaghetti with just water and flour hand-made by the local housewives, covered with a sauce made from porcini mushrooms picked and gathered from the woods of the Tiber Valley, or alternately with a chianina meat sauce.

What is “BORGO”. The literal translation of Borgo in English would be “Village”. But the term Village does not fully explain what a “Borgo” is. A “Borgo” is a fascinating small Italian town, generally fortified and dating back to the period from the Middle Ages to the Renaissance.
Category: Toscana1 March 2018