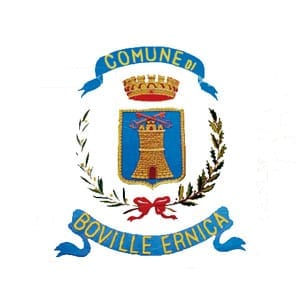 The name derives from Bovillae, an ancient Volscian or Oscan-Samnite town, afterwards Roman, so called after the cult of the god Bove (Bovis Villae = city of ox).  The adjective Ernica was added in 1907, to distinguish the town from another one with the same name and also to underline the relationship with the Hernici, an ancient population of Lazio Region. From the middle age until 1907, the borgo was called Bauco, which derives from baculus, probably referring to the landowner’s name; another hypothesis says it could derive from the word buca (“hole”) due to the presence of caves in the soil.

You can start exploring the historic centre of Boville, with its dense network of streets, alleys and squares, from Porta San Nicola: here the massive city walls and its towers suddenly attract our attention. In Via Roma, you can admire Palazzo Liberati, then going through Via della Ripresa you’ll reach Palazzo Filonardi, the largest architectural complex of the borgo; the palace is adorned with splendid portals, three mullioned windows, valuable floors and monumental staircases. Palazzo Filonardi was erected on an ancient castle by Cardinal Ennio Filonardi for the vacation of the papal court, and dedicated to the benefactor Pope Paul III in 1532. The author of such beauty was the famous Renaissance architect Jacopo Barozzi, known as “Il Vignola”, whose style can be recognized on the portal. Part of the Palazzo Filonardi’s complex is the abbey of San Pietro Ispano. It was probably built on the place where the hermit lived once he arrived from Spain after fighting the Moors (X or XI century). The crypt was built over the Saint’s grotto; the Simoncelli’s chapel preserves some of the most precious artworks coming from the  ancient Constantinian basilica of San Pietro in Vaticano: the Angel by Giotto, the only mosaic work by the Florentine artist that has survived to modern times; a marble basrelief of the Madonna del Sansovino, a silver bust attributed to Benvenuto Cellini containing the relics of San Pietro Ispanico and a porphyry cross walled into the wall dating back to the fourteenth century. An early Christian sarcophagus (330-350 a.d.) with a special basrelief decoration, found in 1941 among fields of the Sasso suburb, has been recently added. Going on to Cor­so Umberto I we find the Church of Battista, opened to wor­ship in the 1633 (now desecrated), which houses a fresco representing the Bap­tism of Christ by Domenichino. On the same street we can also admire Palazzo Simoncelli (XVII century) erected by the homonymous prelate, today the seat of the Town Hall; the elegant Palazzo De Angelis belonged to the family of the writer and poet Desi­derio. Arriving to Piazza Sant’Angelo, you can see the Palaces Emilio and Velio Filonardi (XV century) and, on the other side the collegiate Church of San Michele Arcangelo; the buil­ding is a eighteenth century recon­struction by Giuseppe Subleyras, of a previous worship place already mentioned in a document dating back to the 1125. The church houses the tomb of the Cardinal Ennio Filo­nardi, a fine St. Sebastiano by Ca­valier d’Arpino and other remarkable paintings of various ages, including an Addolorata by Antonio Cavalluc­ci (XVIII century). Walking from Piazza Sant’An­gelo towards via Capo Croce, you arrive at Piazza Santo Stefano, whe­re the Church houses many pain­tings by the school of Bologna, and Palazzo Bulgarini. Further down, towards Piazza San Francesco, we can admire the Bulgarini tower, the church of San Francesco (currently an exhibition hall) and the monastery of San Francesco. Some fine fresco­es dating back to the XIII-XV century, and some others of Byzantine style emerged during the renovation of the church; there is also a cycle attributed to a pupil of Giotto (XIV century). Going on along via Nuova, until via Tritoni, you’ll get to Piazza Santa Maria where the church of Santa Maria, the tower and Palazzo Cometti Vizzardelli (XVIII century) are located. Porta Santa Maria leads you out of the town centre. The tour, however, is not over, since you can walk along the medieval walls and towers, up to the square of the ancient washtub, then to Por­ta San Francesco that is annexed to the convent on its left, and finally to another smaller gateway, the Posterula, with its staircase. From here the walk can continue around the walls overlo­oking the landscape hills of Ciociaria.

Among the few handcrafts that survive in Boville there is embroidery, an art spread by Benedictine nuns, who still produce trousseau, linens and layettes using needle and thread.

The olive oil from the olive groves of Ciociaria is the basis of traditional dishes such as baked lamb with potatoes, which is eaten in Boville in the Easter period, polenta with vegetables or with sausages and beans, or timballo alla baucana, which is prepared in an original way.

What is “BORGO”. The literal translation of Borgo in English would be “Village”. But the term Village does not fully explain what a “Borgo” is. A “Borgo” is a fascinating small Italian town, generally fortified and dating back to the period from the Middle Ages to the Renaissance.
Category: Lazio15 January 2018