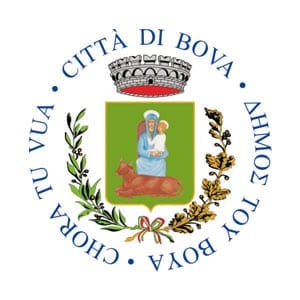 The town of Bova (“Vùa” in Greek language) is very ancient. According to legend, an Armenian queen led her people on the mountain Vùa, a name clearly related to “bovine,” i.e. a land of  oxen pasture.

Bova looks like a balcony, 850 meters high, from where you can admire the whole coastline below. The Borgo is one of the most important Hellenistic centers in the Reggio Calabria District, and many traces of its ancient history still can be found here. Its Cathedral dates back to the first centuries after Christ and since then it has been rebuilt and renovated many times. It has a basilica structure, with a nave and two aisles.  Here are preserved some important artworks such as the Chapel and the statue of the Madonna “Isodìa” and Child, attributed to Rinaldo Bonanno (1584), built by Sicilian masters specialized in colored marble inlay work. Excavations brought back to life a number of tombs and the old Norman church. The ruins of the Norman castle (10th-11th cent.) stand at the top of a rocky spur. The Norman tower (11th cent.) was used as a guarding point of one of the four access gates to the town. The church of San Leo (17th cent.) has a single aisle and side chapels, with precious 19th century stuccoes on the walls and a sumptuous Baroque marble altar, with a white marble statue of St. Leo by Pietro Bernini (1582) in its niche. The saint holds a broken hatchet in his left hand and stands on an octagonal marble base. The Chapel of the Reliquie (1722) preserves other Baroque treasures. The Church of the Carmine (17th cent.) is a charming chapel that belonged to the noble Mesiani family. The late Renaissance façade is defined by tall pilasters that support a cornice with triangular pediments. The stone portal was made by local craftsmen. Inside there is a marble altar. The façade of the Church of the Immacolata (18th cent.) has a late Baroque carved stone portal, the work of some local stone carvers. The Church of the Spirito Santo (17th cent.) has a simple, austere façade, with a late Renaissance portal by local stone carvers. The church was badly damaged from the 1783, 1908 and 1928 earthquakes, and today is in disrepair.

Also damaged by earthquakes, but later restored and reopened for worship, is the Church of San Rocco (16th cent.), where Greek-Byzantine rites are celebrated. The many noble residences scattered among the narrow streets reveal the importance of this Borgo. They are generally built in stone and brick, embellished on the outside with pilasters, cornices, corbels, and splendid entrance portals. Worth of a visit are: Palazzo Mesiani-Mazzacuva, built in the late 18th century near the town’s ancient defense structures and used by the municipality for a Magna Graecia cultural center; Palazzo Nesci Sant’Agata (18th cent.),which stands on the main square and is privately owned; Palazzo Tuscano (19th cent.) in the highest part of the Borgo,  which houses the Aspromonte National Park Visitor Center.

The flourishing local crafts trade goes back to the agro-pastoral traditions and to the “Hellenistic” culture, following a long tradition that survives today in some areas, such as wood carving (spoons, cake and cheese molds decorated with floral and geometric patterns, goat collars, bones for corsets), glass-working (windows, tables, drinking glasses), weaving (blankets, tablecloths, rugs). The raw materials for traditional weaving are wool, linen and, above all, the broom plant, which is gathered on the slopes of Aspromonte and is prepared by the weavers using a lengthy manual process. Strolling through the tiny streets of Bova you can still hear the clacking of an old loom. Craft items were generally given as wedding gifts, imbued with a delicate artistic sensitivity and archaic references which expressed a bond: the shepherds made the gifts with their own hands. During the long period grazing in the mountains they would carve objects from olive and orange trees wood, representing symbols such as sun, moon, and birds. Weavers were instead inspired by frescoes representing the Virgin Mary and the saints seen preserved in the grottoes and in the Byzantine churches: the Greek cross, for example, in a variety of stylizations, is very popular in the ornamental weave.

Here you can taste simple traditional food – goat’s milk, tomatoes, olive oil – as well as delicious dishes such as maccarruni with goat sauce, cordeddi with sauce, tagghiarini with chick peas, i ricchi di previti with tomato. Excellent are the pork meat products (sausages, soppressata and capicollo); cheeses, of course (sheep’s and goat’s milk), including ricotta and musulupi, a pulled curd cheese eaten at Easter time; and holiday sweets, such as Christmas pretali, Easter nghute, and scaddateddi, a kind of “doughnut” with cumin seeds. Worth to be tasted is the lestopitta, a pancake made with flour and water, fried in oil and eaten hot.

What is “BORGO”. The literal translation of Borgo in English would be “Village”. But the term Village does not fully explain what a “Borgo” is. A “Borgo” is a fascinating small Italian town, generally fortified and dating back to the period from the Middle Ages to the Renaissance.
Category: Calabria16 January 2018