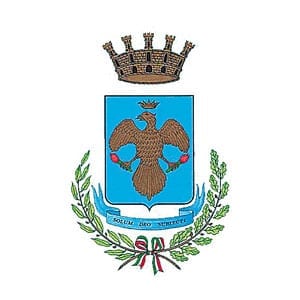 The name derives from the Greek jerax, “sparrow hawk”, referring to the bird of prey that, according to legend, showed the inhabitants of Locri the place where they could rebuild the town to be protected from the Saracens. Others believe the explanation of the place-name comes from the ancient Byzantine name, Aghia Ciriaca “Saint Ciriaca”, or the from jerà akis, “sacred peak”.

As the borgo is made up of different plateaux linked by roads, it is recommended to visit it on foot in order to enjoy its numerous architectural gems. You can start your visit from the Borgo Maggiore, where the ancient town gate of the Varvara and the pottery master’s shops once stood. At the entrance, on the right, you can see the Citadel, an area partly built on the rock; following the National Road you reach the Repubblica Square with the splendid church of St. Maria del Mastro. Nearby you can admire  the ancient palace Del Balzo that can be reached along a side street which branches off from the State Road not far from the eighteenth century church of St. Giorgio. In the Piana you can visit two monasteries: the Cappuccini and the other of Minori Osservanti (1612) whose church, dedicated to St. Francesca Romana, is today the chapel of the Cemetery. Not far from here stands the picturesque Byzantine church of St. Maria del Monserrato. Leaving the Borgo, following once again the State Road you can reach the hamlet Borghetto, where you can admire the church of St. Martino. Proceeding along Roma Street you’ll reach the Bombarde promenade. On the left there is a private house that was the old St. Giacomo hospital. Going along Roma Street and passing through the fifteenth century gate Del Sole you’ll reach Del Tocco square (tocco in Greek means assembly). Seven streets lead into the square and delimit seven blocks and palaces (on the left the Grimaldi-Serra palace, today the Town Hall). Entering Zaleuco Street, among palaces and magnificent portals, you’ll reach the Tribuna square and the sumptuous Romanesque-Norman Cathedral. Consecrated in 1045, it was partly built on the rock and partly on a Greek cross Crypt, despite extensive repairs it is supposed to date back to VIII century. From the Cathedral, rather than going through the Bishops’ Arch, you can go along Caduti sul lavoro Street where you find the eighteenth century church of the Sacro Cuore and, immediately after, in the Tre Chiese square, you can see the monastery and the Gothic church of St. Francesco d’ Assisi (1252) and the XI century Greek-Orthodox church of St. Giovannello (St. Giovanni Crisostomo).From here you can go up to the Castle as far as to the Baglio, a large open space where citizens sheltered in case of danger. At the end of the open space the historic Norman Castle rises, whose ruins date back to the XI century. From the Castle you go back down to the town centre along Buonarroti Street. From the Bombarde you go down St. Lucia Street to the Borgo to visit the church of Carmine, halfway down the street, and the churches of St. Siminio and St. Nicola.

You must sample the famous Greek wine of Gerace, made from Greek grapes. It is amber yellow, liqueur like (17 degrees) and produced in limited quantities in the area of Bianco, 20 km from Gerace. It was offered by the Greeks, together with honey, as a sign of hospitality.

Even desserts in Gerace are Baroque: ravioli are made of sponge-cake covered with cream, sugar and egg whites.

What is “BORGO”. The literal translation of Borgo in English would be “Village”. But the term Village does not fully explain what a “Borgo” is. A “Borgo” is a fascinating small Italian town, generally fortified and dating back to the period from the Middle Ages to the Renaissance.
Category: Calabria8 January 2018