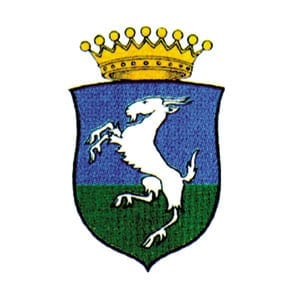 Brisighella is the name of the Borgo since 1550, originally it was called Braxeghella or Brissichella.

The Borgo, leaning against a chalky cliff,  is dominated by three selenite rocks, where the Fortress, the Clock Tower and the Sanctuary of Monticino stand. The Borgo was protected  by two concentric lines of walls, now incorporated in some dwellings. In the historic centre, the medieval atmosphere is preserved in the shady narrow streets, majestic ancient buildings and houses, hidden corners, squares and gardens.

The heart of the Borgo, magical at night, is Piazza Marconi, with Palazzo Maghinardo, the town hall, and the unique via del Borgo, also called via degli Asini (Donkey Street). This is a  covered walkway, perched high above the street level:  on one side it has tiny entrances to various ancient homes (still lived in today) and opposite, on the street side, it has a long line of arched openings which overlook the street beneath.

The Clock Tower was built in 1290 and rebuilt in 1548, it was damaged several times and the last renovation was made in 1850. The beautiful restored Fortress is an excellent example of medieval military architecture. It currently houses the Museum of Rural Life.There  is a beautiful view from the bastions of the fortress, as well as from the Sanctuary of Monticino, built in the 18th century.

Inside the borgo, just outside the old defense walls, you can visit the Church of San Michele Arcangelo, completed in 1697, it houses important artworks, such as  a stunning “Adorazione dei Magi” by famous painter Marco Palmezzano (XVI century) and beautiful decorations.

An excellent extra virgin olive oil is produced in this area, as well as very good cheese and artichokes. The local dish is called Spoja Lorda, a soup made with handmade pasta, eggs, cheese, meat broth.

What is “BORGO”. The literal translation of Borgo in English would be “Village”. But the term Village does not fully explain what a “Borgo” is. A “Borgo” is a fascinating small Italian town, generally fortified and dating back to the period from the Middle Ages to the Renaissance.
Category: Emilia - Romagna15 January 2018