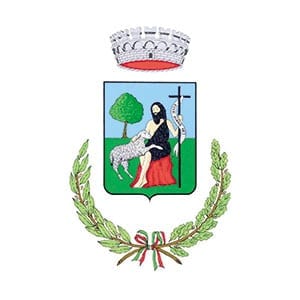 San Giovanni Battista (Saint John the Baptist) gave the name to the settlement, which has been characterized by the fertility of the soil and the abundance of harvest since ancient times.

The feast of San Giovanni takes place on the day of the summer solstice, when crops ripen.

The original residential settlement must have developed on the ancient fundus Mariniani of the late Roman age, probably around a country manor of which some archaeological ruins emerged.

Before entering the Borgo, opposite to the city tower you can admire the church of Santa Lucia. Built on a former religious building in 1786, it is also dedicated to the Madonna “della Scuola”. Of the ancient church, of which the new one has maintained the architectural structure, only a fresco by an unknown author from Romagna depicting a Madonna and Child remains. The organ with about 600 tin and wood  barrels (XVIII century) has been restored and is now used in performing concerts.

Once you enter the Borgo you get to Piazza Silvagni, it’s plan developed around the market square and dates back to the eighteenth century. The square is bounded on one side by the church of Santa Lucia and on the other side by the castle entrance tower, now the town tower, which was part of the fortification system built by Sigismondo Pandolfo Malatesta between 1438 and 1442 (the other entrance tower, the northern one, was demolished in 1854). The town tower is 24 mt. high thanks to an additional floor where the clock and the belfry were housed. You can also see the side holes left by the drawbridge chains.

San Giovanni is a fortified borgo, crossed by the “via di mezzo” (middle street) that is overlooked by fine buildings dating back to 1700 and 1800. This is the main street; the axis of symmetry for the side roads that intersect or run parallel,  according to a fifteenth century geometric plan, in that time the Malatesta family renovated the original thirteenth-century city plan. The corn pits are now partially visible in the pavement thanks to some recent restoration works.

In the borgo there are at least three major buildings: a church, a theatre and a palace. The church of San Pietro, already mentioned in a document of 1348, should be of the same age of the castle foundation, that was built during the  thirteenth century. The church appears today as it was renovated during the mid- eighteenth century, but it was restored two times earlier by the monks of San Vitale in Ravenna (XVI century). A very important history that is represented by the table of Christ carrying the cross by Nicolò Rondinelli (late XV century) and the wonderful high altar by the sculptor Domenico Taschini (1754).

The Massari Theatre, still active today, is one of the beautiful nineteenth-century theatres of Romagna. The building was first the oratory of the Confraternity of the Rosary, then it became a theatre in 1821 and radically renovated in the typical Italian-style, with the shape of a horseshoe with two tiers of boxes, in 1855.

Palazzo Corbucci was the residence of the Lord of Pesaro, Malatesta de’ Malatesti, in the second half of the fourteenth century. After several changes of ownership, the palace was purchased by Pietro Corbucci in 1812 and today you can see it only from outside.

Finally you can admire the castle walls that are considered as the pivot of the Malatesta fortified system. The defensive plan (XIV century), also projected by Filippo Brunelleschi, consisted of walls topped by six towers, surrounded by a moat (where the stream Ventena still flows today), with two drawbridges equipped with towers.

A recent restoration work has involved the Ventena bridge and part of the ancient city walls.

Your tour can end at the church of Santa Lucia, the departure point, next to which is  the church of Santa Maria in Pietrafitta, rebuilt in 1730. This church houses a small treasure: a fragment of a pluteus slab dating back to the Carolingian period (VIII or IX century); a rarity that takes you back to the dark background of the time.

The local dish is “passatelli in brodo.

Wine from the hills around Rimini, olive oil and honey are the local excellent products.

What is “BORGO”. The literal translation of Borgo in English would be “Village”. But the term Village does not fully explain what a “Borgo” is. A “Borgo” is a fascinating small Italian town, generally fortified and dating back to the period from the Middle Ages to the Renaissance.
Category: Emilia - Romagna26 February 2018