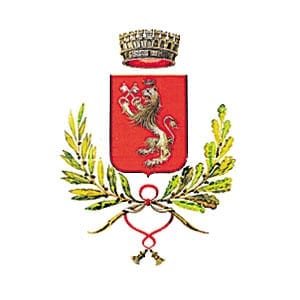 The name derives from the Latin bonus conventus, meaning “happy, fortunate community”: people gathering to enjoy the fertility of the land and the advantages of being close to the Arbia and Ombrone rivers, as well as the excellent position near the ford of the river on the important Via Francigena or Romea. Here travelers used to stop and take lodging and refreshment.

The strong 14th century defensive walls, which retain the Sienese style in the architectural form, once enclosed the entire borgo like a butterfly in the cocoon. It had no openings other than two gates made with thick wooden doors and iron fittings.

The Borgo has remained intact for centuries, protected by the moat and the Guelf battlements of the watch walkway. It underwent great transformations in the 1800s, with the construction of buildings just outside the walls, including the Teatro dei Risorti.

Inside the walls, Via Soccini runs across the village from north to south, the street is named in remembrance of an old family whose members, including a couple of heretics, have contested a number of church doctrines in the 16th century. It is the most aristocratic street in Buonconvento, where many important Palaces and buildings of major landowners were built.

Foremost is the Palazzo Podestarile, with the 14th century rectangular civic tower and the two Gothic arches in the façade, which has 25 stone coats of arms of the old podestas. Then Palazzo Comunale, or the Town Hall, with its attractive brick front, and the imposing Palazzo Taja, built entirely in brick in the latter half of the 1700s by a noble family. On the southern side the façade is enlivened with a large balcony with a wrought iron railing and a sundial.

Right across stands the Palazzo Borghesi, built in the 14th century, which belonged to an old Sienese family whose coat of arms can be seen on the splendid façade. Nearby is Palazzo del Glorione, once belonged to the Santa Maria della Scala hospital, which has been used as both a hospital and a hospice, as the Via Francigena passed by here. Today the ground floor houses the Museum of the Confraternity of Mercy, with the interesting Oratory of San Sebastiano, dating back to the 16th century (note the wrought iron gate, a small master piece of craftsmanship).

On the opposite side stands the Church of SS. Pietro e Paolo, which also has a fine brick façade. Its current classical style is the result of restoration work in the 1700s. A small marble stone bearing a cross and inserted in the wall to the left of the façade is engraved with the date of 1103, which could be traced to its founding date. The emperor Henry VII died in this church in 1313. The important art works by top Sienese artists such as Duccio di Boninsegna were originally located here, but currently are in the Val d’Arbia Museum of Sacred Art, which is further down the Via Soccini, in the 19th century Palazzo Ricci-Socini.

There are two other important streets in the old town, one located on the east side and called Via del Sole (“Sun Street”), and the other located on the west side called Via Oscura (“Dark Street”), both connected with Via Soccini and, like the latter, they are paved with stone slabs. The buildings on Via del Sole are built modestly, and until the 1930s the street was occupied by families of carriers, carters, people who transported goods.

But Buonconvento also means Art Nouveau, a typically urban style which for some strange reason took the root here as well, bringing the borgo to the attention of the art world. Beautiful examples of this style are the previously mentioned Palazzo Ricci-Socini; Palazzo Farnetani on Via Soccini 51; Palazzo Ricci on Via Roma 3; the Grisaldi del Taja nursery school on Via Dante; Palazzina Sensi; and Palazzina Castellani Bettarini, on the same street. Lastly, on the Cassia road heading towards Rome, Villa Rondinella stands on a small hill, designed by Gino Chierici (1910), it is richly decorated and built with fine materials.

Here all the wines are DOC: the Val d’Arbia white, from which vinsanto is also made, Orcia red and white, the grapes of which also make a good nouveau and a vinsanto. Memorable aromas are given of by the Crete Senesi white truffle, and the local Chianina veal is also excellent. Tuscany means tables set with salamis, prosciutto, sausages, bruschetta, panzanella, fettunta, pappa al pomodoro (a tomato based dish), pici con le briciole, pappardelle with hare sauce, tagliolini noodles with chick peas, chine of pork with toscanelli beans

What is “BORGO”. The literal translation of Borgo in English would be “Village”. But the term Village does not fully explain what a “Borgo” is. A “Borgo” is a fascinating small Italian town, generally fortified and dating back to the period from the Middle Ages to the Renaissance.
Category: Toscana15 January 2018