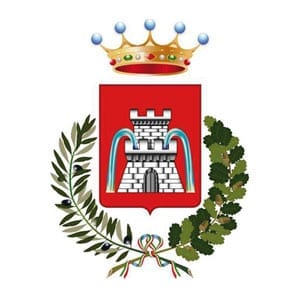 The origin of the name is probably Lombard. The foundation of Caramanico is related to a settlement of a Lombard  community, probably a group of soldiers.

From the woods of Mt. Maiella, the Borgo of Caramanico looks like  “a melt of Acropolis”, as city planners call high middle ages settlements that have this kind of structure. The village was founded in Longobard period on a promontory at the confluence of two rivers, the Orfento and the Orta. The main path develops on the line of the ridge, with atop the fortification, which had to be defended not only from the castle, now reduced to ruins, but also from the same main church, the almost millenarian abbey of Santa Maria Maggiore, equipped for this purpose with robust walls. The Abbey has a magnificent gothic portal dated 1452, surmounted by a lunette with a refined bas-relief representing the coronation of the Virgin,by the German artist John from Luebeck. The inside, rebuilt in the XVI century and enriched with the late sixteenth century stone altar of the Assumption, with polychrome marbles, twisted columns, and a wooden fifteenth century Crucifix. If the church of the Trinity can certainly not compete with the nearby abbey of Santa Maria Maggiore, in the nearby Via Verdi you’ll admire  two beautiful Palaces, D’Aquino e Salerni, built in 1706 after the earthquake and rich in coats of arms. Do not miss to visit  the Church of San Tommaso d’Aquino with a Romanesque portal surmounted by a rose window, whose construction began in 1401, The Church was erected at the behest of the Dominican friar Giacomo d’Aquino in memory of his famous ancestor Thomas. Today the building is used as an Auditorium.

The lower part of the Borgo is the most authentic one, here you can visit the church of San Nicola di Bari, with a sober neoclassical façade and a remarkable Baroque portal dated 1592. The statue of St Nicholas in the central niche dates back to the XIII century.

Even if the plaster has gradually covered the facades of the buildings, the district of San Maurizio remains the heart of this Borgo, with the votive shrines scattered in the streets, with images of the Birgin Mary carved by local stonemasons. In this part of the Borgo you’ll find the church of San Maurizio, already mentioned in 1301, and the former Clarisse convent , founded in 1636 and presently the seat of the Museum Fauna Abruzzese.

Five km away from the center you can visit San Tommaso hamlet with the most important religious building of the area: the Romanesque Abbey of Saint Thomas Becket, whose construction started in 1202 together with the annexed convent, which was left unfinished. In spite of the restructuring, and the crashes caused by earthquakes, the church retains artistic treasures, such as the splendid high relief of the Christ blessing with the twelve Apostles on the central portal and the thirteenth century frescoes in the three naves of the Church.

Entering from the side door, to the right, is the Colonna Santa (Saint Column), a strange monolith with a Corinthian capital, which was considered miraculous by those who, imploring the grace of good health, rubbed against it. In the crypt, on the other hand, a spring water refers to ancient pre-Christians cults and to the virtues of thaumaturgic Maiella waters.

Alla Chitarra  pasta with lamb sauce is the typical dish of Caramanico terme. Here you can also taste very good cheese and meats (lamb, pork or beef, or niche products such as black pig and wild boar).

What is “BORGO”. The literal translation of Borgo in English would be “Village”. But the term Village does not fully explain what a “Borgo” is. A “Borgo” is a fascinating small Italian town, generally fortified and dating back to the period from the Middle Ages to the Renaissance.
Category: Abruzzo15 January 2018