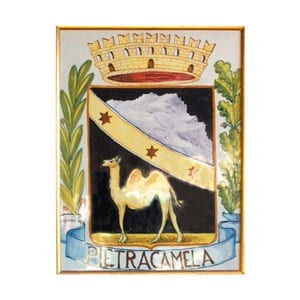 Petra Cumerii and Pietra Cameria were the first names of this borgo. The first part of the name derives from the word Preta, that in old Italic language indicates the rock on which the borgo rises. The second part remains mysterious. It could refer to the rock shaped as a camel’s hump that distinguishes itself from the rest of the borgo; it may also refer to the invasion of the Cimerii population coming from the east (Petra Cimmeria) or to Petra Cacumeria , which in Italian means “pietra in cacumine” (“the peak stone”).

Pietracamela’s wealth is the pure air, the marvellous view over the Gran Sasso mountain, the simplicity of life and the old precious village made of stones, with its 15th and 16th century palaces, its winding and down narrow streets surmounted by small arches, barn-balconies, small paved roads, shops carved in the rock, old fountains. A feeble shadow on the walls follows you among worn down houses, a dog sleeping in the back garden, the thin thread of hills seems to reach the height of your happiness among these panoramas that give you, as a gift, visions, thoughts and desires.   Antique churches, such as the Church of  San Giovanni (1432) and that of San Rocco (1530) with dates written on the gates’ architraves, wooden altars and the  basin of holy water in the Parish 16th century church of San Leucio, a tower-house, remains of an old mill, portals of the houses near the Church of  San Giovanni, whose dates range from 1471 to 1616. The façade of a house in Via Vittorio Veneto is decorated with two elegant stone mullioned windows. On the architrave, the first has a head and open scissors, possibly a sign of the wool teasers;  the other one represents a knight who plays the trumpet, a face in the front and the face’s profile.

What is “BORGO”. The literal translation of Borgo in English would be “Village”. But the term Village does not fully explain what a “Borgo” is. A “Borgo” is a fascinating small Italian town, generally fortified and dating back to the period from the Middle Ages to the Renaissance.
Category: Abruzzo11 February 2018