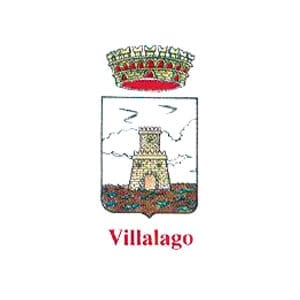 The name originates from the vernacular Latin Valle de Lacu, which recalls the presence of the nine lakes in the territory, many of which have now disappeared.

Villalago unexpectedly appears to visitors coming from Sulmona through the rugged gorges of Sagittarius, on top of Mount Argoneta.

The houses stand lined up on ravines and crags as if they are about to slip.

Down, at the bottom of the mountain, the river Sagittario flows through the thick poplar woods forming lakes with clear and green waters, which are an oasis for aquatic birds.

From the main square, the Borgo climbs up in a fascinating sequence of steps, lanes and squares, forming an amphitheatre on the eastern side of the mountain,.

The characteristic suppuort, which are arches on which stone wooden beamed houses were  built, are  a particular element of this place.

Along the alleys of the old town, on the stone gates of the houses, it is possible to see many coats of arms, depicting animals, flowers and faces.

Carrying on from Piazza Celestino Lupi, after climbing the great staircase, you will get to the  heart of the Borgo, where you can visit the parish church, built in the Romanesque style of Abruzzo, which preserves a painting dated 1521 depicting the Madonna del Rosario and the altar of San Domenico, a precious stone carved monument of the XII century.

Continuing up, you will first get to Porticella, which once had a small door that accessed a built-up area and  the old Town Hall, which was built during the second half of the nineteenth century.

This is where the Church of San Giovanni Battista stood, with its bell tower that was converted into a municipal tower with a clock in 1887. From here you get to the Palazzo della Cancelleria  (XVI century), which was home to its ancient university and which has been converted into houses. Remains of  the mullioned windows and stone lintels are still visible today.

In Villalago you can admire two beautiful Churches: San Michele Arcangelo and the Church of the Madonna Addolorata. The first is in the upper part of the Borgo, its portal presents a magnificent stone lunette that dates back to the eleventh or twelfth century, depicting Christ holding the book of life, flanked by two kneeling angels, and crowned with the faces of hooded monks.

The Chapel of the Madonna Addolorata dates back to 1575 and was annexed to the palace of the Lupi family. The incision Ave Maria Gratia Plena AD 600 that was found in the Monastery of San Pietro, is preserved inside the bell tower of S. Domenico.

In the lower part of Villalago is the church of the Madonna di Loreto, which was already mentioned in early fourteenth century. On the portal is a bas-relief that recalls the lunette of the Church of San Michele depicting an angel.

Inside, the painting of The Madonna del Rosario is dated 1561. The beam of the bed used by the Saint in the hermitage of Prato Cardoso is kept under the altar which houses in its  largest niche the statue of San Domenico, one of the saint’s teeth is preserved in a magnificent fifteenth century reliquary in the sacristy.

Next is the Church of the Grazie, near the public gardens, embellished by a little stone portal dated 1555.

In order to appreciate the genius loci of this place, the sense of life from which Villalago was born, you must visit the Hermitage of San Domenico. The saint lived in this place of spiritual retreat around the year 1010. Here San Domenico found the peace he was searching for, in fact the hermitage stands like a gem set between the rocks and the beautiful emerald green waters.

The stone portal of the church has Byzantine style drawings, but it is the mullioned window, that takes the eye to the lake where mallards, gooses and coots live. It is a place that leads you to believe that God moved heaven onto the earth. Today this place along with Lake Pio is a natural reserve. It is surrounded by mountains with forests of Turkey oaks and beeches, on the border of the Abruzzo National Park.

Cazzelliti, a type of gnocchi or sagne, a type of pasta and beans. The pacchiarozze, a type of pasta similar to fettuccine, served with lamb sauce and pecorino cheese are also typical. Among the desserts,  the mostaccioli are prepared with almonds, wine, and chocolate covered with icing.

What is “BORGO”. The literal translation of Borgo in English would be “Village”. But the term Village does not fully explain what a “Borgo” is. A “Borgo” is a fascinating small Italian town, generally fortified and dating back to the period from the Middle Ages to the Renaissance.
Category: Abruzzo1 March 2018