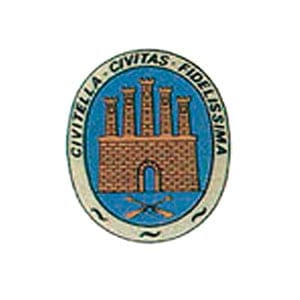 Cities which have the word “Civitella” in their name (from Latin word civitas) reveal their ancient origins. In this case, Civitella del Tronto was probably an ancient federate Roman city.

The word “Tronto” refers to the important river which flows from Abruzzo through Marche.

Civitella del Tronto appears like a warrior standing between the sea and the mountains.

High up on a granite boulder on the road connecting Teramo and Ascoli, the borgo is amazing in all seasons, both when the forests on the side of the mountains appear in all their beauty and when the winter dusts the roofs with snow.

Beautiful, limpid and endless views frame what  remains of the thirteenth century circle of walls that characterize this city-fortress.

Situated near the border with the Papal States, the borgo was the northern bulwark of the Kingdom of Naples.

You can start your visit from the fortress, built by the Spanish in the second half of the sixteenth century, it was set on top of the borgo like an acropolis.

500 metres long and with a 25 thousand square metres surface, the fortress is a very important work of military engineering, one of the largest fortifications in the whole  of Europe.

It attracts thousands of visitors every year. Starting from the drawbridge you can admire the bastions, walkways, parade grounds, the sleeping quarters, prisons, the powder rooms, ovens, stables, tanks, the Governor palace and also the Church of San Giacomo.

The “sentry” of the Kingdom of Naples kept a close guard over the village below, a place where today you can peacefully get lost in its maze of narrow streets, which are called “rue” like the French word for street; it seems that here is the narrowest street in Italy, which is called the  “Ruetta”.

Among the places worship you must visit the Collegiate Church of San Lorenzo, that was built at the end of the sixteenth century, according to a Latin cross plan, and where you can find remarkable paintings dating back to the seventeenth century.

Of the same period is also the recently restored Church of San Francesco, with its bell tower, the exquisite rose window on the façade, the Baroque interior and the fifteenth century wooden choir stalls.

The small Church of Santa Maria degli Angeli also known as “della Scopa” (“of the broom”) dates back to the fourteenth century; decorated with frescoes, it preserves a dramatic wooden sculpture of the Dead Christ.

Among the civil buildings, worth mentioning is  the Palazzo del Capitano from the XIV century, with its string course frames on the front that are finely carved with naturalistic subjects and the Anjou family coat-of arms.

Outside the town walls, you will find the Convent of Santa Maria dei Lumi, thus called because of some sightings of mysterious lights. Built in the first half of the fourteenth century by  the Franciscans, it has a beautiful cloister which preserves inside a gilded and polychrome wooden effigy of Our Lady dating back to the second half of the fifteenth century-

Finally, the sixth century Abbey of Montesanto, one of the first Benedictine centres in Abruzzo, rising on a hill is the crowning-element of the borgo.

Civitella del Tronto is known for local crafts (wrought iron, carpentry and ceramics) but it is also famous for its culinary delights.

What is “BORGO”. The literal translation of Borgo in English would be “Village”. But the term Village does not fully explain what a “Borgo” is. A “Borgo” is a fascinating small Italian town, generally fortified and dating back to the period from the Middle Ages to the Renaissance.
Category: Abruzzo10 February 2018