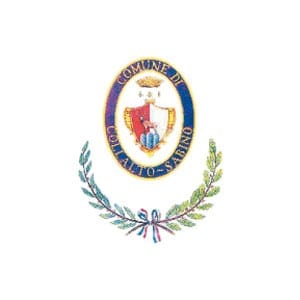 Established by the Lombards in the 10th century, Collalto Sabino derives its name from the hill with the same name (Collis Altus) and from the name the Collalto family, the first landowners.

The general plan of the Baronial Ca­stle is the result of the restorations done by Baron Alfonso Soderini in the second half of the 16th century, when not only the palace but also the Rocca (fortress) was remode­led. The Castle was then remodeled several times during the last century and in recent years.

The Rocca preserves the structure of the 16th-17th century, when it was a military asset, with a square central tower and two round corner towers, as well as a series of watchtowers, ramparts, and stations. In­side the castle there is a large park with an old well, and from the top of the main tower there is a magnifi­cent 360 degrees view. From here you can admire the peaks of the Gran Sasso, Terminillo and Maiella mountains. The majesty of these mountains appears in all its splen­dor at sunset, as well as the lights of the 34 surrounding villages. The circuit of city walls goes back to the 15th century. Walking down the narrow cobblestone streets, you can admire the splendid stone doorways of the houses and immerse yourself in a very suggestive atmosphere. Do not miss to visit the be­autiful octagonal fountain in Piazza della Podesteria, the 17th century Palazzo Latini, recently restored, and the nearby cemetery of the parochial Church of Santa Lucia, built in the 11th century, which has an excellent fresco from the 1500s. Just outside the borgo are the Convent of Santa Maria, with a fine 15thcentury portal, and the ruins of the old Monta­gliano castle.

A tourist path winds up Mt. San Giovanni, at the top of which there are the remains of an old abbey built over the foundations of a Roman temple. A tumultuous stream flows toward the valley, for­cing its way between two walls of rock constituting the buttresses of Mt. San Giovanni and Mt. Cervia. An old abandoned mill stands on the bank of the stream.

What is “BORGO”. The literal translation of Borgo in English would be “Village”. But the term Village does not fully explain what a “Borgo” is. A “Borgo” is a fascinating small Italian town, generally fortified and dating back to the period from the Middle Ages to the Renaissance.
Category: Lazio11 January 2018