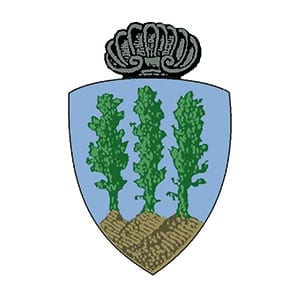 The name is attested for the first time as Loro in 1050, from the Latin Laurus, “laurel”. Ciuffenna is the name of the nearby stream, mentioned as Iofinne in 1037, probably deriving from the Roman name of Etruscan origins Clufennius or from the Etruscan Cefa, “doe”. The name of the stream was added to Loro in 1862.

Loro Ciuffenna stands between the Arno river and the hills just at the foot of the Pratomagno Mountain. All around you can see the Balze, unusual clay and sand rocks up to a hundred metres high that also characterize the territory of the nearby borgo of Castelfranco. With its gently sloping ridge, the Pratomagno Apennine massif is a mixture of grass, rocks and woods that oversees Tuscany forgotten villages and Romanesque churches.

The stone houses built overhanging the gorges of the Ciuffenna river, the dark winding paved streets and the old bridge are the traces left by the Middle Ages together with the signs etched on the faces of the Madonnas in the churches, and going back in time, the mysterious symbols on the stone of the Parish of Gropina.

Going along the ancient bridge, you’ll get to Porta dell’Orologio, that is the entrance to the most fascinating heart of the borgo: built along a single axis road, crossing from east to west in direction of Arezzo, ending with a second gate. Going up along the street on the left you’ll get to the church of Santa Maria Assunta, mentioned in a document dating back to 1275 and bearing engraved on the lintel the date 1333. The church houses a fine polyptych by Lorenzo Bicci depicting a Madonna and Saints on a gold background (early XV century) and frescoes dating back to XIII-XIV centuries.

The churches in the territory of Loro Ciuffenna all share the Romanesque origins. Worth a visit is the church of Santa Maria in Faeto that houses works of art ranging from the Gothic to the Baroque period (tablet by Bicci di Lorenzo, XV century) and the church of San Biagio al Borro preserving a sixteenth century Crucifixion.

There are also a few religious buildings built to encompass tabernacles of miraculous images, such as the sanctuary of the Madonna dell’Umiltà (1604), on the road to Gropina, rich of seventeenth century art works. This area is characterized by the churches built on the route of the ancient Via Clodia, that more or less followed the same way of the current Via dei Sette Ponti. Out of the six parish churches placed on Via dei Sette Ponti, the Church of San Giusto and the Church of Gropina are in Loro Ciuffenna. The church of San Giusto was named since 1011 and, as well as the Church of Gropina, has a basilical plan with a nave and two aisles. It was restored three times: the fourteen paintings of the Stations of the Cross (1745) were made during restoration works in the eighteenth century. The parish church of San Pietro in Gropina is one of the most beautiful in Tuscany and is considered to be a Romanesque masterpiece. The church includes the ancient early Christian basilica (V-VI century) and a Longobard building (VIII-IX century), as it is shown by some gravestones carved with the typical cross. Also the magnificent pulpit has Lombard origins (dated 825) reused by the Romanesque workmen between the twelfth and thirteenth century.

Finally, the Basilica of Nostra Signora, entirely frescoed with biblical scenes, stands at the eastern edge of the borgo. Inside the Cappella della Misericordia, adjacent to the Basilica, you can admire a Pietà, painted by Carlo Portelli in 1561.

Zolfino bean cultivation is typical of this area, so named for its colour that recalls that of sulphur. Chestnuts from the mountains; you can see its grinding in the mill of Loro, together with that of wheat. A delicious bread, which is a combination of flour and water typical of the place is baked in the hamlet of Gorgiti.