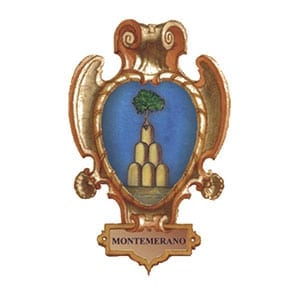 According to tradition the name derives from Mons Marianus, in memory of the consul Caio Mario, here defeated during the civil war against Lucio Cornelio Silla (88-82 B.C.). But the Latin roots might refer to local characters or families, as Marius, Amerius, Mirius.

Inside the triple circle of the medieval walls, the borgo is intact. The oldest circle encloses the upper part of the town called castello, “castle”; the second, fortified by the Sienese with three circular towers in the early fifteenth century, protects the district which was built in the thirteenth century under the Aldobrandesca fortress; the third is an addition to complete the defensive structure and links the borgo with the church of San Giorgio and the new district of the first half of the fifteenth century.

From the Dal Ponte gate, today without the drawbridge, you’ll come to Via Italia, where you can choose between two itineraries: the first one will lead you through the narrow alleys on the left that widen into silent spaces in the shade of the walls, such as the small squares of the Antico Frantoio, San Martino and Ritiro, the second climbs up to piazza del Castello, crossing an arch that in the past was the only entrance to the town centre. The square looks like a postcard from the past: it is a sequence of stone buildings with loggias, arches, terraces and flowery windows, roofs on different levels that create an elegant play of lines and volumes. The building on the right surmounted by the quadrangular tower of the Sienese formwork is the “palace”, first home of the Aldobrandeschis, then of the Basques and the Sienese vicars, then seat of the Municipality of Montemerano from the fifteenth century to its suppression in 1783.

The upper part of the borgo is completed by three parallel alleys and two other small squares, Forno and Campanile. The latter takes its name from the bell tower of the parish church of San Lorenzo, whose façade, with a Romanesque travertine lintel on which two twisted crosses are carved.

Descending to via Italia, the heart of the medieval borgo where, among arches and small porticoes, the market used to be held. Through a new arch under the walls, skirting the buttress shoe of the parish church of San Lorenzo, you’ll reach Piazza San Giorgio, which opens wide to the light and air of the countryside. On the right is the fourteenth-century church of San Giorgio. This is the most important religious building in southern Maremma, intact in its architecture and in the fusion with the surrounding nature, thanks to the covered walkway that closes the square to the south and connects the church to the borgo. Inside there are the polyptych by the Sienese painter Sano di Pietro (1458), remarkable for its complex iconographic apparatus and refined pictorial layout; the polychrome statue of St. Peter, the work of another great artist of the fifteenth century Siena, the “Vecchietta”, author also of the wooden doxal carved in bas-relief of the Assumption; and the table of the Madonna della Gattaiola (so called because of the hole that, according to tradition, was opened by a parish priest to let the cat pass through), perhaps an organ door with a Annunciation painted by an anonymous Sienese master of the mid fifteenth century, near John Paul and Sano di Pietro. In addition to the Sienese masters, the church preserves intact the stratification of the different phases of its decoration, from the late Gothic frescoes of the Last Judgement (where angels with trumpets arouse the dead and Satan swallows and expels the damned, while horned devils torture others) to those of the Legend of St. George (1491) set in the square of Montemerano; from the carved and painted ciborium of the mid-16th century to the Baroque altars and the chapel in the Rococo style of Good Counsel (1791), following the 18th century redesign of the church.

After leaving the San Giorgio gate, follow the via dello Spedale, where the medieval hospice stood until the mid-18th century. From the outside you can admire the city walls with their ramparts, before returning to the centre passing through a small passage, called “the hole”, opened in the nineteenth century to facilitate the passage of men and animals and shaded by a centuries-old wisteria that in spring is filled with fragrant violet flowers.

A top quality oil, the result of a selection of local olives is the excellent dressing of delicious pasta dishes, soups, sauces, vegetables and meat.

Fresh ricotta, herbs, spinach or chard are the ingredients of the tortelli di Montemerano, seasoned with meat sauce. There is also a sweet version: the same stuffing, but with sugar and cinnamon instead of salt. Another speciality is aquacotta, a vegetable soup from the garden, plus onion, celery and tomato, enriched with a fresh egg. The egg is broken up on the hot soup immediately before pouring it on the stale bread cut into slices. There is no unique recipe, because each one prepares it in its own way and according to seasonal vegetables.