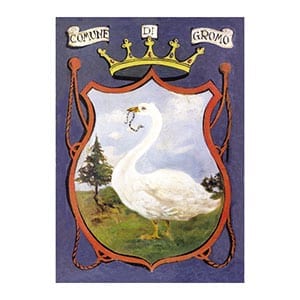 Gromo means “lump of rock”, a protuberance emerging in the landscape, but its name could also derive from a Celtic tribe called ”Grumi”.

You may start your visit from the theatrical Piazza Dante, where you can admire the Ginami castle (13th century), Palazzo Milesi (1443), now the City Hall, and the Church of San Gregorio with its 17th century altar, which represent the borgo as it was.

Along via Milesi you can see some beautiful private dwellings, with their portals made with the local stone. Strolling around the narrow streets in the highest part of the old town centre, you’ll admire the central fountain and many others small fountains scattered around, the secular windows of the historical residential façades, the Liberty villas built in the early 20th century, when Gromo became a fashionable resort.

The church of San Giacomo (the most important of the borgo) stands outside the old town while in other villages of the same period, the church stands in front of the Town Hall in order to oppose the spiritual and the temporal powers. It has a very austere exterior appearance, with a portico made of local stone and side entrances. The main entrance is on the southern façade, it is decorated with a white marble portal in classical style. The interior of the church is very different from the outside: there are frescoes, paintings, wooden objects and marble statues. The baptismal font dates back to 1511 and the beautiful high altar is decorated with gold elements.

What is “BORGO”. The literal translation of Borgo in English would be “Village”. But the term Village does not fully explain what a “Borgo” is. A “Borgo” is a fascinating small Italian town, generally fortified and dating back to the period from the Middle Ages to the Renaissance.
Category: Lombardia24 January 2018