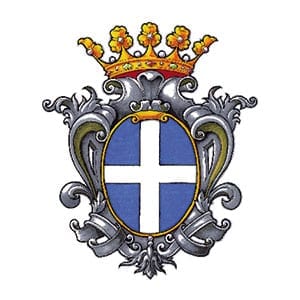 The name derives from Castrum Valterii and refers to the Lombard Gualtiero, sent by the King Agilulfo in 602 to conquer Mantua.

There is a landscape of water and land all around Gualtieri, one of the small capital cities of the Po Valley. Farmsteads, farmhouses, poplar trees, moats, bridges, canals, levees, roads, everything takes us back to water.

The Borgo rises on the right bank of the Po river and has one of the most beautiful squares in Italy, Piazza Bentivoglio. In the past it was a public square and at the same time the honor courtyard of the palace (now occupied by a large garden). The director of this urban jewel was prince Cornelio (followed by  prince Ippolito) with the help of the famous engineer (and architect) Giovanni Battista Aleotti. The urban complex of Gualtieri was designed integrating the old borgo with the new elements. Palazzo Bentivoglio, wanted by prince Ippolito (son of Cornelio), was made by Aleotti at the same time as the square.

In 1600 also the church of Santa Maria della Neve was completed: the façade was designed by Aleotti, well integrated with the porticos of the square.

Leaving the square, you will find two sacred buildings: the Oratory church of the Immaculate Conception overlooking a small square adjacent to via Vittorio Emanuele II, and the church of Sant’Andrea, which was documented for the first time in 1233. The church, rebuilt in 1713, has an interior colored with different shades of pink, blue and yellow.

In the nearby hamlet Pieve Saliceto, do not miss to visit  the Annunciation of the Blessed Virgin (17th century), one of the most beautiful churches near the Po river.

The borgo produces an excellent wine. The local dishes are: broth with cappelletti, and tortelli with pumpkin.

What is “BORGO”. The literal translation of Borgo in English would be “Village”. But the term Village does not fully explain what a “Borgo” is. A “Borgo” is a fascinating small Italian town, generally fortified and dating back to the period from the Middle Ages to the Renaissance.
Category: Emilia - Romagna4 January 2018