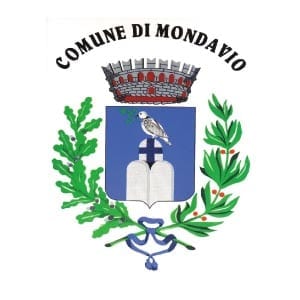 The municipal coat of arms with the image of the dove recalls the tradition according to which the village was built around a Franciscan convent founded on  a land donated to San Francesco by the Ricci family. The saint would have appreciated the place, for the nature and variety of birds: from here, the name Mons Avium, “mountain of the birds”.

Porta San Francesco is the main entrance to the Borgo, the only one remained out of the three of the whole defensive wall circuit. The fortress is the masterpiece of Mondavio. It was built between 1482 and 1492 by the Sienese Francesco di Giorgio Martini, and it is considered one of the greatest examples of Italian fortifications. Designed to adapt the fifteenth century defense systems to the gunpowder discovery, this war machine was never used. On the elliptic fortified tower there is a catapult, while one the other one you can find the Museum of Historical Reenactment. The donjon has ten faces. The entrance is on the third floor; on the fourth, in the reception hall, a historic banquet is set; in the fifth and last floor there is the armory.

Once you have visited the donjon, a passage will lead you to Piazza Della Rovere, allowing the view of the moat and other siege machines. On the north-west castle walls you can find the small Apollo Theater in art nouveau style (1887), recently restored. Palazzo Giorgi Pierfranceschi connects Piazza Della Rovere to the Town Hall Square, where the Church of San Francesco stands.

The façade of the church is in red terracotta, as well as the former sixteenth century building. The single nave presents interesting artworks, like the Immaculate Conception, painted by Giuliano da Fano between 1525 and 1535 under the influence of Perugino, his teacher. Taking the right from the exit of the church you’ll find the cloister of the convent, with eighteen round arches and low cross vaults.

On the ground floor there is the Civic Museum where you cannot miss to visit the tabernacle and a beautiful wooden ciborium, made by Friar Liberale from Macerata. On the first floor of Palazzo del Municipio you can admire the most intriguing painting of Mondavio: the Madonna and Child by Olivuccio di Ciccarello, a small altarpiece (1385) full of tenderness, which combines the courtly style typical of the painter to the Byzantine iconography. From the Town Hall Square along via Garibaldi and then via Mazzini, you’ll reach the Collegiate Church dedicated to Saints Peter and Paterniano, founded in 1444, and appreciated for the façade designed by the architect Bartolomeo Genga (1563). The church preserves the valuable paintings of the Guardian Angel by Giuseppe Bottani. At 1.5 km from Mondavio the church of Santa Maria delle Querce deserves to be seen for its sixteenth century frescoes. The visit may extend up to the hilly hamlet of Sant’Andrea di Suasa, about ten kms away from Mondavio: a medieval castle surrounded by walls, where the Benedictine monks gathered and protected the sparse population in the country.