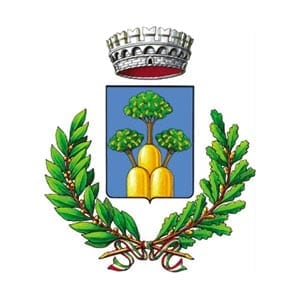 The name Mondolfo probably derives from Montoffus, the founder of the feudal family that had the lordship over the castle until the advent of the Malatesta Family. According to another hypothesis the name may derive from Mons Ophis, the snake (from the Greek ofis), because the wood on which the village stood was full of reptiles.

The heart of the Borgo is the large central square dominated by the Town Hall, which was built with the civic tower in neo-gothic style in 1931. Next to it, the parish church of Santa Giustina, already attested in 1290, was renovated and elected a Collegiate Church by Pope Urban VIII in 1635. In the elegant cantoria located above the main entrance, there is an organ dated 1776 by Gaetano Callido, the greatest exponent of  the Venetian organ school of the Eighteenth Century.

Passing by the sixteenth century Palazzo Giraldi Della Rovere, you will reach the Sferisterio, playground of the famous Renaissance play called “gioco del pallone col bracciale”. Through a large seventeenth century arch, you’ll get to the Oratory of San Giovanni Decollato, a small church which in 1612 belonged to the Confraternity of the “buona morte” (good death), whose members during the funeral rites wore a black bag. The gilded wood altar has a crucifix considered miraculous, and the interesting canvas of Salome with the head of St John the Baptist.

Walking along the walls, you will reach the belvedere, from where you can have a gorgeus view of the Monte Conero and of the marina. From Palazzo Peruzzi you’ll reach Porta Fanestre and then the first wall circuit, oval in shape and dating back to the VI century in its oldest part, while the existing masonry date back to the XV century. From its terraces you can admire the panorama of the surrounding countryside and valleys. The bastion of Sant’Anna ceased its military function and has become an Italian garden characterized by the geometries of the flowerbeds.

From the Ospedaletto hamlet, the ancient hospital for the pilgrims outside the walls, you’ll arrive to the second wall circuit, erected in the thirteenth century and rearranged in the fifteenth century by the well-known military architect Francesco di Giorgio Martini, which was responsible for providing a homogeneous defensive system, adapting the castle and the impressive fortress with the use of firearms.

Porta Santa Maria (XIX century) is the connection to the monumental complex of St. Augustine. The church of Santa Maria del Soccorso was built in the late sixteenth cent. and the interior was redone during the eighteenth cent.. The façade has three elegant sandstone portals with decorative motifs in Renaissance style. Inside, the paintings of sacred subjects are the work of the seventeenth century masters: Claudio Ridolfi, Giuliano Persciutti and Giovan Francesco.

A km away from the Borgo stands the convent of San Sebastian, built in 1760 on the site occupied by a church of 1479. A little farther, the abbey of San Gervasio of Bulgaria, founded in the V-VI century, has a basilican system borrowed from the large churches of Ravenna and an eighteenth-century interior. In the crypt is kept the most large sarcophagus of the Marches of the VI century, with engraved Christian symbols, crosses, crowns of laurel and two peacocks symbol of immortality.

Traditional recipes are based on a legume such as beans and Adriatic Sea blue fish, the brodetto. The flavors are exalted by the local oil and by the colli mondolfesi wine. Spaghetti with red tuna sauce and anchovies are the local interpretation of the typical Italian dish and is celebrated during a popular Festival, the “Spaghettata”, on the first Sunday after Easter.

During the Garagoj festival, in April, another local product can be tasted: a variety of shellfish caught on the local seabed.