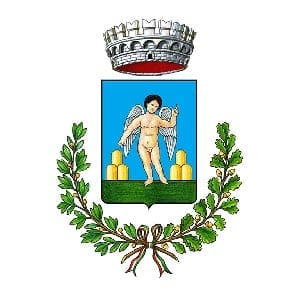 The name derives from the Latin Mons Germanus and refers to the two castles of Monte Grimano and Monte Tassi, united as twin brothers (germanus in Latin means “brother” ). Today Monte Tassi is a hamlet of the Municipality of Monte Grimano Terme. Grimano would be a simple transliteration of germanus.

The Borgo has a “snail” urban plant, with narrow streets that climb uphill. The historic center rises in between these cliffss, almost three hundred meters above the valley, and the civic tower of the old castle. 18 meters high, this tower dates back to the first half of the fifteenth century and is the symbol of Monte Grimano. The three bells date back respectively to 1613 (the largest), 1797 (the one in the middle) and 1811 (the smallest).

In the Borgo there are two barriers corresponding to the ancient gates of the castle, disappeared like the drawbridge. The ancient walls were incorporated into the seventeenth century houses, when permission was given to build on the walls themselves. The current walls were raised at the beginning of the twentieth century to protect the road form landslides.

At the entrance of the Borgo stands the seventeenth century Massaioli palace, today the Town hall.

The parish church, dedicated to Pope St. Sylvester, is elegant in the simplicity of its late 18th century neoclassical style. The church preserves eight large paintings dating back to the period between the Seventeenth Century and the Nineteenth Century. The Crucifix of the XVI century and the organ pipes of the Eighteenth Century are also remarkable.

Piazza Garibaldi is an important meeting place for the community of Monte Grimano terme, often used for cultural and musical events thanks to the excellent acoustics.

The Borgo’s specialty is tagliatelle (hand-made pasta) seasoned with local truffles. Meat-based second courses are also appreciated because the excellent ingredients  come from the local farms.

Two important festival are celebrated in the Borgo, the Pork festival (in February) and the Black Truffle festival (in July). At Christmas Time do not miss the Christmas Concert of the Monte Grimano Marching Band.