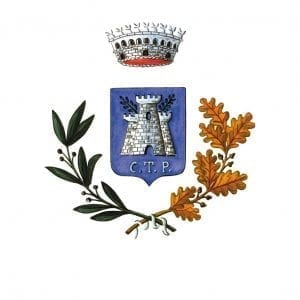 The name may derive from the Roman god Janus, in the versions Pax Iani (peace of Janus), Passus Iani, (passage to the temple of Janus, the remains of which are still visible along the old road between Chiusi and Perugia), or Pagus Iani, (village dedicated to Janus). According to another hypothesis, the name derives from  Pagus Dianus, meaning “bright village, in a good position”.

Paciano’s fanshaped plan took shape in the 1200s, with three parallel streets interconnected by smaller perpendicular streets. The Borgo is enclosed within its 14th century walls, about 600 meters long, which include eight towers and three gates, Porta Fiorentina, Porta Perugina and Porta Rastrella. Throughout the Middle Ages the Borgo was an important castle guarding the Perugian domain over the Chiugi territory. Walking through the tiny streets in the center, one is immersed in the atmosphere of centuries past. Just inside Porta Rastrella is Palazzo Cennini (14th century), renovated by Cardinal Francesco Cennini in around 1500. The palazzo has an irregular plan, and is divided into two bodies connected by a walkway above the door. The southern façade is characterized by the tower today known as the Rocca Buitoni. The building has three floors, with the first floor sumptuously decorated with frescoes from the 16th century; there are also two chapels inside the building. Going past the Etruscan well, there are two churches close by. The Church of San Giuseppe dates from the 1300s; it is constructed entirely in stone and is three fourths below street level. Inside there is the old gonfalon of the commune, a canvas from 1450 of the Madonna of the Graces by the workshop of Benedetto Bonfigli. In 2000 frescoes from the 15th century were discovered behind the protective air cavity. The church also has a small collection of sacred vestments. The Church of San Carlo Borromeo was built in the 1600s through the efforts of Cardinal Cennini. It has a fine stone portal in pietra serena and contains a wooden Christ dated 1620. In Piazza Repubblica the Palazzo del Municipio (Town Hall) has been entirely restructured in stone and holds a Madonna and Child from the 16th century. Also worth noting is the 17th century Palazzo Baldeschi, built for the Abbot Giacomo Baldeschi in local stone and brick. Outside the historic center: the parish church of the Assunta, constructed in about the 10th century; the church of the Salvatore or “del Ceraseto,” built before the 10th century over an ancient pagan temple (the fresco at the central altar is by a pupil of Perugino, Gianbattista Caporali); the convent of Sant’Antonio, from the 15th century; the Torre d’Orlando, the only part remaining of the Paciano Vecchio castle; the church of Madonna della Stella, built in 1572, and the church of Santi Sebastiano e Rocco, enlarged in the 15th century from a very old 6th century structure.

From these hills comes a magnificent extra virgin olive oil, enjoyed all over the world for its aroma and flavor. it has obtained PDO status and is organically grown.

There are many famous local dishes such as Torciglione, thus called for its shape like a coiled snake, which is a Christmas cake and is typical of the area’s simple yet refined cuisine. The ingredients are: sweet and bitter almonds, egg, sugar, candied fruit, pine nuts, coffee beans and alkermes liqueur.

What is “BORGO”. The literal translation of Borgo in English would be “Village”. But the term Village does not fully explains what a “Borgo” is. A “Borgo” is a fascinating small Italian town, generally fortified and dating back to the period from the Middle Ages to the Renaissance.
Category: Umbria5 January 2018