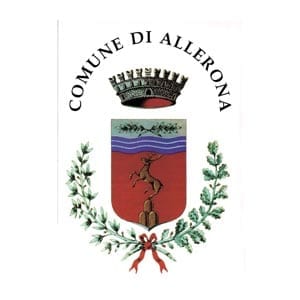 The name derives from the arbutus tree, lerone in Umbrian dialect.

Allerona rises in a wooden area on the border between Lazio, Umbria and Tuscany.  In the Middle Ages, the borgo forged an alliance with the town of Orvieto – about twenty kilometers away – against Chiusi. The city system, some sections of the city wall and the two gateways called Porta del Sole (Gate of the Sun) and Porta della Luna (Gate of the Moon) are what remains of the castle, built in 1275 by the Monaldeschi family and then owned by the Filippeschi’s. You may start your visit from the Visconteo Palace, enlarged during the Renaissance and now a private residence. On the right you can see the Church of Santa Maria Assunta dating back to the 12th century but restored at the end of the 19th century, as also revealed by some paintings of the Sienese artist Arturo Viligiardi dated 1896. The interior is remarkable thanks to the terracotta decorations, the pulpit and the alabaster windows.

From Via del Poggio, after a short walk, you’ll reach Via della Madonnina, where you can see the castle fortified walls of the borgo. The numerous renovations have changed the structure of the church of San Michele Arcangelo, dating back to XII century as well as the Church of Santa Maria Assunta . In Piazza del Fiore, which can be reached from Via delle Fonti, at the corner with Via Centrale, at number 3 you’ll find the building which from 1373 to 1739 housed the Hospital of the Poor, which granted shelter and relief to pilgrims, travelers and people without any resources.

The most beautiful building of Allerona is perhaps the small rural Church of the Madonna dell’Acqua, just outside the borgo, built in the first decades of the eighteenth century,  with an octagonal shape and a nearby water spring that was believed to be miraculous, where already in 1400 a votive chapel had been erected.

The Feast of  St Isidoro, patron of the farmers, is celebrated on the third Sunday of May. It has pagan origins, linked to the cult of Ceres, goddess of the fertility of the fields. During the Feast, the Pugnaloni’s parade takes place, a parade of allegorical carts decorated with  poplar shrubs, countryside products, ribbons and coloured paper. Characters, animals and agricultural tools that reproduce scenes of life and work in the fields are hand-made by the farmers. The Pugnaloni exhibition at the former Dopolavoro is worth a visit. In the area known as Selva di Meana, among the ridges of the Paglia Valley, stands Villa Cahen, built in 1880 in Liberty style by the financier Edouard Cahen. The Villa  has a beautiful park consisting of four gardens, in Italian, Japanese, English and Exotic styles. The park was designed by the French landscape painters Henri and Achille Duchêne. In the archaeological site of Sant’Ansano, which reveals traces of buildings dating back to the Roman age,  some  remains of two funerary stone and brick monuments of the 2nd century AD are still visible. One of the most interesting events in Allerona is the live Nativity Scene, that takes place on December 26 in the Old Town. In summertime, between the end of July and the middle of August, the National Theater “Stella d’Oro” Festival takes place, hosting  amateur theatre groups from all over Italy.

You can spend a day at Villalba Park, at direct contact with nature. Inside the woods, extending over twenty acres and at over 600 meters of altitude, there are several picnic areas and a cottage with a restaurant service.

What is “BORGO”. The literal translation of Borgo in English would be “Village”. But the term Village does not fully explain what a “Borgo” is. A “Borgo” is a fascinating small Italian town, generally fortified and dating back to the period from the Middle Ages to the Renaissance.
Category: Umbria18 January 2018