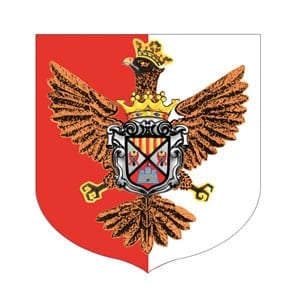 The name derives from the Latin Castrum Regal, “castle of the king”. In 1324 Federico the II of Aragon, in reward for the loyalty of the city during the war against the Angevins, ordered the construction of the castle and granted the privilege of tax exemptions to those who had established their residence in the shadow of the fortress. From that moment the place was given the name of Castro, later Castroreale.

Castroreale is a perfect combination of art and nature. Here you have the chance to admire very beautiful art works as well as a fantastic natural landscape: Capo Milazzo and the Aeolian islands can be admired from Piazza delle Aquile, along the eastern side of the Cathedral. On this same side, a plaque surmounted by three eagles reminds us of the privileges granted to Castroreale by Philip IV of Spain. The interior of the church, erected in the first three decades of the seventeenth century and dedicated to the Assunta, is full of works of art: the elegant marble statue of St. Catherine (1534) by Antonello Gagini, who was also the author of a holy water stoup (1530) and the sculpture of Saint Mary of Jesus (1501); the other stoups are by Sebastiano Ferrara (1625). The wooden altar sunlight of the chapel of the Sacrament, the baptismal font (1625), the pulpit (1648), the choir (1612) and the wooden choir carved walnut are from the Seventeenth century, while the main altar is from 1717. On the right of the Cathedral is the sixteenth century bell tower with a real working clock. Along corso Umberto I arrive at the church of the Candelora, which probably was the chapel of the castle of Federico the II of Aragon. Inside you can admire the magnificent wooden platform of the high altar, magnificent expression of the artistic handicraft of Messina in the baroque era. Going backwards the road that leads to the castle, and turning to via Farini, you get to palazzo Peculio, location of the Municipality. From here you can see the Monte di Pietà and the southern side of the church of the SS.Salvatore, built toward the end of the fifteenth century in Giudecca, the Jewish quarter, and then enlarged and decorated with Baroque stuccoes. The church, today used as an Auditorium, has a gothic portal and a marble altar. Nearby you can visit the Art Gallery of Santa Maria degli Angeli, which exposes a sixteenth century triptych of the Flemish school, and the Civic Museum, hosted in the church of San Filippo Neri. In the lower part of the via G. Syracuse there is a complex of two churches: the church of Santa Marina, that combines elements of Romanesque style with local Baroque decorations and the adjacent church of Sant’Agata, largely rebuilt in 1857, that preserves a beautiful Annunciation by Antonello Gagini (1519), a Sant’Agata Montorsoli (1554), a Madonna by the Florentine Michelangelo Naccherino (1601). Porta Raineri, located in the Valle district, was the ancient access to the north of the city.

In the southern side of the borgo, the church of Jesus and Mary has fourteenth century origins and was probably the ancient Mother church. It is accessed via a double staircase made of stone. Inside, the wooden altar is the “biscuit of the abbess”, so called because designed according to tradition by the nuns of the convent.

The sweet castriciano has a flavor of anise seed, a recipe jealously guarded from local producers. There are two versions: the harder, suitable to be smothered in granita or in sweet wine, and soft, stuffed with nutella or jam. Black rice, prepared with rice, sugar and toasted almonds and pounded.

You cannot miss macaroni: here are seasoned with pork sauce, or with eggplant and a dusting of salted ricotta.