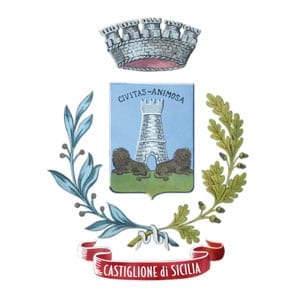 Dating back to 1092, the first mention of Castrileonis can be found in a document of Roger I. The name means “great castle”. From 1151 to 1236 the place was known as Castellio.

The Borgo of Castiglione di Sicilia rises on a hill that dominates the southern shore of the Alcantara river. You may start your visit to the historic center from via Regina Margherita, a lava paved street that leads to piazza Lauria: here, the simple construction of the Town Hall dating back to the beginning of the twentieth century, stands on the site of the ancient Peculio, which allowed the survival of the citizens during famine times.

Walking up to Sant’Antonio square, in the old Cameni quarter, you will find the church of Sant’Antonio, whose construction began in 1601. It has a beautiful Baroque façade dating back to 1796. In this area you’ll admire some of the most important civil buildings, such as the palaces Camardi, Imbesi, Sardo and Saglimbeni.

From the church of Sant’Antonio, going upward a steep road, you’ll reach the church of San Pietro, built in 1105, according to tradition, even if it could be dated to the period between 1194-1254. The apse and the tower are what remains of the original building. Next to San Pietro stands the eighteenth century church of St. Benedict and the convent.

From piazza Lauria walking along via Federico II you’ll get to the church of San Marco, of Norman origin (XII century) and then to a steep staircase leading to the ruins of a fort , most likely of the byzantine period, called Castelluccio (Castidduzzu).

From piazza Lauria a scenic route leads to the basilica of the Madonna della Catena, the most important church of the borgo, preceeded by a beautiful staircase and a monumental Baroque façade by Baldassarre Greco. Inside, the statue of the Madonna, made of white Carrara marble, is attributed to the Gagini school.

Going on, placed on a sandstone rock, stands the castle of Ruggero di Lauria. It was so important that the Borgo was named after it. In via San Vincenzo there is another fortification: a cylindrical tower known as Cannizzu, symbol of Castiglione. Nearby there is the church of San Vincenzo Ferreri.

Continuing along the road to Francavilla di Sicilia, passing the bridge, we find the church of San Nicola, built in the Norman period between the XII and XIII century. Frescoes in Byzantine style were discovered in the apse.

In the outskirts of the Borgo you can admire the “Cuba” of Santa Domenica, one of the most interesting examples of Byzantine architecture.

Black, sturdy and warm: the wine here is like a volcano. In Castiglione, a wine city, there are several wineries that produce the Etna Doc.

Macaroni with pork sauce and baked ricotta cheese are the typical local dishes. Typical of the area are also the Fave al maccu. The meat is cooked strictly on the grill,  pork, kid or lamb. Among the fabulous cakes of the place, do not miss the sciauni, pancakes of fresh ricotta.