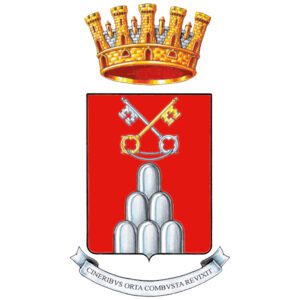 Due to Corinaldo’s proximity to the destroyed Roman city of Suasa Senonum, according to tradition its name comes from the cry curre in altum! (“run uphill!) shouted out by the survivors to the barbarians’ violence. But most probably the name indicates a “colle in alto” (high hill) or a “curia di Aldo” (Aldo’s curia): the latter would reveal a Lombard origin.

Located in a strategic position between the Marca di Ancona and the State of Urbino, the borgo of Corinaldo has its symbol in the imposing walls that have remained practically intact since the fifteenth century.  The entire wall circuit, 912 meters long, can be visited with a fascinating guided tour. The gates, the ramparts, the defense towers, the Ghibelline battlements with forked merlons, and the watch walkways mark the landscape of this rare example of  fortified borgo.

The perfect set for a cloak and dagger film, the heart of Corinaldo is the Piaggia, a stairway of one hundred steps flanked by red brick houses standing in a herringbone pattern.

The borgo has a number of noble residences and important civic and religious buildings. The artistic development in the 17th and 18th centuries was mainly due to the presence of great artists such as the painter Claudio Ridolfi, who lived many years in Corinaldo and died there, and the organist Gaetano Antonio Callido, who left two exceptional pipe organs here.

Civic buildings worth a visit are the Palazzo Comunale (Town Hall), a fine example of neoclassical architecture with a beautiful loggia; the former Convent of the Augustinians, built in the latter half of the 18th century and now a hotel; the Teatro Comunale (Municipal Theater, 1861-69), named after Carlo Goldoni; and the Casa del Trecento which is the seat of the Pro Loco (local town promotion board) and is the oldest building in the borgo.

The churches reveal the spirituality of the area, once a Papal State. The Collegiate Church of San Francesco is very old (1265) and was remodeled in the 17th and 18th centuries, when the convent (1749) and new church were built (1752-59). The Sanctuary of Santa Maria Goretti, with its former monastery now used as the Costume Room of the municipal library, incorporates in an 18th century guise the old medieval church of San Nicolò. The inside is a beautiful example of late Baroque architecture and holds numerous works of art, including a large wooden choir with a splendid Callido organ dated 1767.

The Church of the Suffragio, completed in 1640, was later demolished and rebuilt and opened in 1779. It preserves the painting by Claudio Ridolfi that had been placed on the altar the day it was first christened on January 6, 1641. Another Callido organ is in the wooden choir over the entrance to the Church of the Addolorata, consecrated in 1755.

Coming back to the walls, the visitor’s first impact is with the 15th century pentagonal Tower of the Sperone, 18 meters tall. Attributed to the Sienese architect Francesco di Giorgio Martini, it has been restored several times. Other towers are the Scorticatore (where the walls reach a height of 15 meters), the Mangano, and the Calcinaro, which takes its name from the job (limepit worker) of the person living there. Starting from the Rotonda which is part of the Renaissance addition completed in 1490, and continuing toward the watch round, you’ll come to the Landroni, a walkway covered by a portico. From there you can go back to the walls, which incorporate imposing bastioned gates. Perhaps the most interesting part of the wall circuit is Porta San Giovanni, as it preserves intact many defense elements.

Turning toward the Bargello well you’ll come to a terrace above the archway, from where you can admire – as Prince Charles of England did in 1987 – the historic center and the countryside stretching out below, with the view continuing as far as Mt. Conero on clear days.

The vineyards of the famous Verdicchio vineyards on the hills around Corinaldo produce a delicate wine with a pale straw yellow color, and a dry, harmonious flavor, excellent for fish based dishes. Though it has not yet been awarded DOC, the Rosso di Corinaldo is a very interesting red wine. The area also produces extra virgin olive oil, salami, ham, sausages, and honey.

Passatelli in capon broth is a specialty of the area as well as Vincisgrassi, a kind of baked lasagna made with layers of tomato sauce, parmesan, pasta and béchamel. Roast goose, stuffed with sage, rosemary and garlic and accompanied with thick slices of roasted potatoes, is an experience that should not be missed.

What is “BORGO”. The literal translation of Borgo in English would be “Village”. But the term Village does not fully explain what a “Borgo” is. A “Borgo” is a fascinating small Italian town, generally fortified and dating back to the period from the Middle Ages to the Renaissance.
Category: Marche6 March 2018