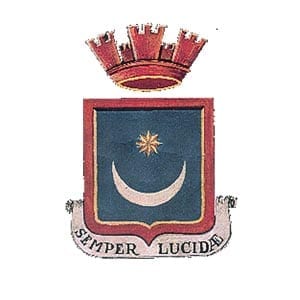 The first name with which Lugnano in Teverina is documented is Lugnanum Tyburinae (1290), with reference to the inhabitants of the Tiber valley below (Teverina) who moved uphill in order to escape malaria fever around the sixth century. B.C.

The name Lugnano may derive from Lucus Jani, forest of Janus, the corresponding female of which is Luna (“moon”).  The moon is designed in the borgo’s coat of arms.

You may start your visit from Viale Regina Margherita, which leads you to Piazza Santa Maria, where you will find the most important monument of the borgo, the Collegiate Church of Santa Maria, a masterpiece of Romanesque art, which alone is worth the trip to Lugnano. According to tradition it was built over an earlier church built by Desiderius, king of the Longobards; the date of the building is uncertain, it probably dates between XI and XII centuries. The façade has a five columned pronaos and a rosette with a double wheel design surmounted by a smaller rose window surrounded by seven porcelain cups and an eagle on the roof.

The interior, which has one nave and two aisles, is fully decorated with columns and capitals, and a mosaic flooring. The crypt, which is preceded by a beautiful Schola Cantorum, is rich in symbolism, with its vine tendril trabeation and figured slabs. A triptych by Nicolò Alunno, a fifteenth century Umbrian painter,  is preserved in the apse of the church, and in the chapel there is a Decollazione del Battista  by Livio Agresti.

Surrounded by mysterious sculptured images, the Collegiate Church is like a Bible for the poor, that, as in other Romanesque cathedrals, allowed the congregation to read messages of faith through known symbols.

On Piazza Santa Maria you will also find Palazzo Pennone, built around 1650. It has a rectangular plan and three floors. The palace corners, the balustrades, the portal ashlars-works are made from travertine. The name Pennone, which was the name of the first owner, seems to refer to a striking image of a ship yard. In fact, it stands on the highest point of Lugnano, towering above the borgo. It has recently been renovated and is now the town hall.

Worth visiting are the two Churches of Sant’Andrea and Santa Clara and, just outside the borgo, surrounded by Turkey oaks and not far from the medieval gate, you will find the Monastery of Sant’ Antonio da Padova, built by the Capuchins in 1579.

The Monastery of San Francesco was built in 1229, in the same place where, in 1212, the saint performed a miracle, which is represented in a fourteenth century fresco of St. Francis freeing a  duck to rescue a child from the jaws of a wolf.

Coming back to the centre of the borgo you can see a medieval gate, built in the mid-ninth century at the same time as the city walls, it was restored during the second half of the fifteenth century by order of Pope Pius II, whose family bears the coat-of-arms.

Strolling around, you can enjoy alleys, stairways, the elliptical Via Duca degli Abruzzi and the Logge quarter, Palazzo Pannicelli in Piazza della Rocca, a former late nineteenth century factory that has been turned into a multimedia tourist office, and the Campo dei Fiori square.

Going out of the borgo along the road toward Attigliano, you can see the Church of Santa Maria del Ramo (or Ramici) which stands isolated on a hillock surrounded by cypresses, this is another mystical place built in the early fifteenth century in the place where a shepherdess found an image of the Virgin Mary.

Finally, if you are interested in archaeology you can visit the Roman ruins of Villa Rustica, built in the first century B.C. on a hill overlooking the Tiber, in Poggio Gramigna.

A typical product of Lugnano in Teverina is the extra virgin olive-oil. Lugnano, in fact, belongs to the network  called “Città dell’Olio” (“cities of oil”).

The meat is also good, thanks to a traceable food processing chain, and local farming.