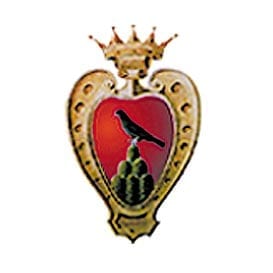 It is a homage to Federico II, a great fan of falcon hunting. The king stayed in Montefalco from 1249 to 1250.

Montefalco has always pursued perfection, as shown by its radio-centric urban structure, with all the main streets converging towards the great circular square, once known as “dei Cavalieri” and also called “Campo del Certame”. Overlooking the square you’ll see Palazzo Comunale (1270), the former church of San Filippo Neri (1705) transformed in 1895 into a Theater (Teatro Comunale), the small oratory of Santa Maria (XIII century) and significant examples of noble residences, namely the palaces Senili, Santi-Gentili, Langeli and Camilli, all dating back to the sixteenth-century. From the square, take the road that leads to the thirteenth-century district of Colla Mora, where you will find the church of San Francesco, built together with the convent between 1335 and 1338, rich in artworks including a Nativity of Perugino, frescoes by the Umbrian school dating back to the 15th century and the famous scenes of St. Francis’ life painted in 1452, with great narrative and decorative skill, by Benozzo Gozzoli, a pupil of Beato Angelico

A nice walk along the 13th-14th century walls will take you to the San Leonardo hamlet, where you will admire the church and convent of Santa Chiara. The first stone of the church was placed in 1303 thanks to the will of Clare of Montefalco. Nowadays, the church shows the seventeenth century modifications and reconstructions. However, the small chapel of St. Croce holds a precious cycle of frescoes portraying her life, which were painted shortly after the saint’s death (1333). These were painted by two anonymous, yet worthy Masters. The frescoes by Francesco Melanzio (other works by this painter are kept in the Municipal museum) can be admired in the Church of the Illuminata (15th cent.) at the far end of the district. Opposite the Church, you can admire the convent of St. Leonard. Walking back up the main street (today called Corso Mameli) you come across the church of St. Augustine with its splendid gothic façade and its beautiful fifteenth century cloister. It was built in the second half of the thirteenth century and contains interesting fourteenth-fifteenth century frescoes by the Umbrian School. Further along are the Renaissance buildings belonging to the Pambuffetti and Tempestivi families. Your visit can come to an end with a final look at the mighty, well preserved city walls (13th cent.) and at Porta Federico II, the town gate dated 1244.

Throughout the world Montefalco means Sagrantino, the precious red wine certified DOCG whose passito version is perfect with roasts and desserts. As it ages, it tends to become garnet red, whereas its younger version is an intense ruby red with purple hues. It has a dry, harmonious taste with a bouquet of blackberries. Its alcoholic strength must be 13 degrees and it is aged for 30 months, 12 of which are in wooden casks. Montefalco is not just wine, however. The surrounding olive groves yield a very precious, extra virgin olive oil with a fresh, intense flavor which recalls fruity fragrances or aromatic herbs. The current tendency to produce organic products exalts the typical characteristics of this “yellow gold” which is certified as DOP from the hills of the Colli Martani.

Delicious meat dishes are very well accompanied by a glass of Sagrantino. Choose between: lamb and Chianina beef steak, accompanied with either herbs from the vegetable garden or truffles, or a pork fillet steak. Another typical dish is risotto alla montefalchese. Or you can indulge your fancy with first courses cooked in Sagrantino, such as the excellent gnocchi and pappardelle.

What is “BORGO”. The literal translation of Borgo in English would be “Village”. But the term Village does not fully explain what a “Borgo” is. A “Borgo” is a fascinating small Italian town, generally fortified and dating back to the period from the Middle Ages to the Renaissance.
Category: Umbria6 December 2017