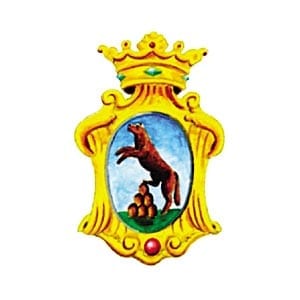 According to legend, the borgo was founded under Hercules. Its name probably derives from Luponi, a powerful Lombard family: one of its members, Lupo I, is mentioned in some reports dating back approximately to the year 787.

Montelupone is one of the small towns in Marche region that has best preserved the relics of its rich history, with its castle walls and four city gates, which in the past were closed at sunset and reopened at dawn, and the original stone paved streets.

The Palazzetto del Podestà (or dei Priori) is located in the central square. It was built in the XIV cent. and is an architectural jewel, in which the Lombard influence can be seen. In the main room of the noble floor there is a 16th century devotional fresco in the typical expressive style of the Counter-reformation. An integral part of the monument are the nearby Civic Tower, the town clock, the large bronze bell. The Civic Painting Gallery is housed in the building and, together with the museum of Old Arts and Trades housed in the basement of Palazzo Comunale, they are a must for an ideal tour of the old borgo.

Built over a preexisting medieval structure and designed by the architect Ireneo Aleandri in 1800 in the architectural style of the time, the Palazzo Comunale faces the square with its neoclassical-style arcade. Inside there is a real surprise: the Nicola Degli Angeli Historic Theater, also designed by Aleandri and given its final shape in 1884 by Giuseppe Sabbatini. Its ethereal ceiling was painted in 1887 by Domenico Ferri.

Wandering through the streets of Montelupone, you’ll admire the beautiful residences  of many important families: the Tomassini Barbarossa palace, Chigi-Celsi-De Sanctis, Narcisi-Magner, Fresco, Emiliani, Giachini and others.

In Palazzo Emiliani there is an interesting frieze by the painter Biagio Biagetti depicting the Four Seasons interpreted in the growth cycle of wheat, from sowing to bread making.

The Church of San Francesco, built by the Franciscan Brotherhood in the second half of the 1200s and later remodeled in the late Baroque style, has an 18th century wooden choir, four stucco statues of the Theological Virtues made in 1752, and an organ dated 1753. The high altar once had a splendid Madonna by Antonio da Faenza (1525), now situated inside the Collegiate Church, in which there is also the Addolorata Chapel, repainted by Cesare Peruzzi between 1934 and 1941. The Maria Immacolata by the Flemish painter Ernest Van Schayck (1631) is pervaded with devotional touches supported by a careful touch of Bolognese classicism.

The Church of Santa Chiara, home of the old convent of the poor Claires, was built between the 15th and 18th centuries. Its doors were inlaid by Cristoforo Casari in 1796, and the large canvas of the Annunciation of the Virgin, is an 18th century copy by Barocci.

The ring of defense walls is about one kilometer long, around the entire perimeter of the historic center. It has preserved its medieval character, although some parts were rebuilt in later centuries. In the Middle Ages the Ulpiana Gate was connected to the castle. Restored in the 16th century, it was remodeled in the Baroque period, when a decorative arch was added, although the 15th century lunette was kept inside.

Outside the walls, about 4 km from the center, is the Benedictine Abbey of San Firmano. Built in  Romanesque style in the 9th century, it has a nave and two aisles, and a precious Byzantine lunette over the portal. Inside, under the high stairs, there is an enchanting crypt with the relics and the statue of St. Firmano in polychrome earthenware. The fresco of the Enthroned Virgin between Saints Rocco and Sebastian is by Giacomo di Nicola of Recanati, formerly attributed to the school of Gentile da Fabriano.

Vincisgrassi took its name in the late 1700s from the Austrian general Windisch Graetz, who first introduced the recipe. A tomato sauce is prepared with mixed meats and offal, and then spread together with béchamel and grated parmesan over layers of lasagna egg noodles made according to a special traditional recipe.

The artichoke of Montelupone is celebrated during a festival on the second Sunday of May, which has been held for the past 50 years.

What is “BORGO”. The literal translation of Borgo in English would be “Village”. But the term Village does not fully explain what a “Borgo” is. A “Borgo” is a fascinating small Italian town, generally fortified and dating back to the period from the Middle Ages to the Renaissance.
Category: Marche3 January 2018